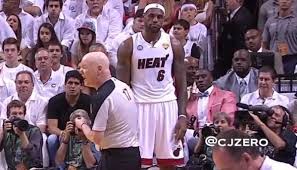 Joey Crawford will be working Game Six tonight, and he may represent the best chance the Spurs have.

There is an arrogance about the Miami Heat that I don’t like.  LeBron James carries himself like he has no doubt this series is over, and then he proves that he was right.  That I admire.  The way the rest of the team syncs with that arrogance, but are mostly incapable to delivering the goods is annoying.

With the exception of Dwyane Wade who has shown that he still has some game lurking in that aging carcass, the Heat are an expansion team who walk into an arena like they are the stars of the show.

Chris Bosh hasn’t been the stiff he was during the Eastern Conference Finals against the Pacers, but is there anyone remotely interested in the NBA who believes that Bosh asserting his will tonight would be anything but weird?  He’s averaged 14.6 and 8.8 against the Spurs as opposed to the 11 and 4.3 vs. Indiana, but he’s still the Shemp of the Big Three (this is a dated reference to the Three Stooges that requires explanation only to people who are victims of a misspent youth.)

The Spurs keep battling in much the same way the Pacers did, but every game where the Heat have been backed into a corner, they have responded with outstanding defense and improved offensive efficiency.

The Heat force turnovers when they are exceptionally active on the defensive end.  When the Heat sit back and allow the Spurs to dictate terms on their offensive end, they lose.

Eric Spoelstra may look down the bench where he has buried Chris Anderson for the past two games.  The idea being to get Gregg Popovich to dust off the virtually inert Tiago Splitter, but this series is not going to come down to anything Splitter or Anderson do.  This is about the Spurs ability to create space for shooters, and limit turnovers.

The prevailing winds are behind the Heat tonight as they have alternated wins and losses since game one of the series against the Pacers (seems like it happened eight months ago).  Losses awaken the Heat, and the 114-104 butt kicking they absorbed on Sunday should be a pitcher of ice water to their faces.

And then will come the best of one climax.  Do you want to bet against the Heat at home in a game seven.  Damn right you don’t.

The difference tonight and Thursday will be the unmatched skill and will of LeBron James.  If he shows up, he will win both games for the Heat.

Popovich doesn’t have a player on either end who can assert his will to end runs, and the Heat have one guy capable of doing it on both.

The result of tonight’s Heat win will be the endless and annoying prattling from ESPN’s Stephen A. Smith (the A stands for superfluous adverbs) about the amazingly, predictably, efficiently, and wonderfully excellent play by James, and the effusive predictions for a follow up game seven masterwork.

I’ll wince through every utterance, and would love for the Spurs to shut him up with 48 minutes of crisp passing, accurate shooting, and communicative defense, but there are games and series that just seem to be predestined to end a certain way.

I’m an expert on the feeling of wins becoming losses as a lifelong Chicago Cubs fan, and a follower of Indiana Hoosiers basketball under Mike Davis, so trust me when I say this deal is done.

Despite the illogic of a team with two bites at a closeout being the overwhelming underdog, this one sure feels like the Heat are going to put another Larry O’Brien Trophy on their shelf.

I will spend tonight and Thursday hoping the Spurs find a way, but minus bizarre calls against James by Joey Crawford, the series is already in the books.