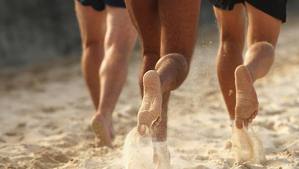 We show only the lower legs to protect the identities of the victims.

The lesson: I’m young enough to continue to challenge my body, but too old to do it without consequence.

Just spent four days in Clearwater, Florida with friends and their family.  I was hard not to learn on our little trip, which was little because Julie and I realized a long time ago that we tend to get a little anxious on day five of any trip.  What I learned most of all is that cavorting like a 25 year-old is no longer in the cards for me.

I’m not talking about late nights, but the days of activity.  Yesterday, on the beach we decided to run a series of 40-yard dashes against one another, and I ran three too many – meaning I ran three.

My physical condition isn’t bad.  I go to the gym at least four times a week to run a mile at 7.5 miles an hour, and then I lift.  I ride my bike 10 miles or so twice or more every week.  I eat pretty well.  After going from 1984-2002 with at least some cheese in every meal, I’m much more likely to eat a bowl of fruit as a pizza.

So it’s not like running for me is dangerous, but after spending a few hours in the Gulf of Mexico on Saturday using muscles that have gone untested since my last visit to a wave filled body of water (2005), and racing people ranging from 19-to-50 in fine white sand was not my best decision.

The first two passes went as well as I could have hoped.  My body moved as it always has, and felt good.  Both races were victories against a 50-year old who is in good shape, so we grabbed the kids.

After 20 yards, all I saw were backs, but they weren’t too far ahead – maybe a yard – so I reached deep for another gear.  Uh-oh.  Total system failure, and a near collapse in the sand.  Falling on the beach is never an option for me, as I loathe being covered in sand or, God forbid, inviting sand to infiltrate my covered areas.  I regained a measure of balance, but still was unable to finish ahead of a competitor over the age of 30.

The wreckage of my lower body today is causing pain resulting in an odd series of compensatory walking strategies that I hope manifests itself in an even gait.  My guess, as I have not yet watched myself walk, is that I’m moving with the grace of the 89-year-old guy who kept passengers from deplaning expeditiously last night when we arrived back in Indy.

However many muscles I have in my hip area – they are each strained, pulled, or torn.

There was also an evening opportunity to dance, and as I know only one interesting and unique dance, I stuck with the “Windmill.”   This dance was taught to me by its inventor, the very gifted Scott Rok Ermeti.  It’s very hard to describe, but when done passionately, the Windmill is a full body workout that combines the exertion of spinning with the grace, control, and balance of advanced yoga.

Doing the Windmill for a full hour is the equivalent of doing cartwheels from Lucas Oil Stadium in Indianapolis to Indiana University’s Assembly Hall in Bloomington, and we danced for at least an hour.

This was a very relaxing four-day vacation for Julie, Ryan, and I with a wonderful group of friends who welcomed us as though we were part of their family.  We all stayed in “The Cedar House” in clearwater as part of a 25th anniversary celebration.  There was 18-20 of us, and the group could not have enjoyed each other more.

One of the wonderful byproducts of returning to Indianapolis has been to reconnect with friends so that trips like this are possible.

Even if they result in searing soreness all about the lower body.