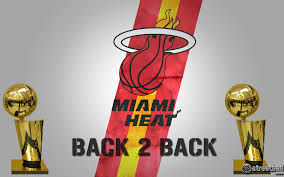 As the game remained close well into the second half, it seemed the Miami Heat were waiting for the moment to unleash the hounds of war and assert their will.

The Spurs fought with pride, but like the Spartans at Thermopylae, the opposing horde was too much to take on when the fighting became serious.  It got serious when Mario Chalmers knocked down a banked three-pointer to end the third quarter.

The well-defended shot set the stage for a slow but steady death the city of San Antonio and the Spurs will never forget.

The Heat slowly built a lead as the fourth quarter began, gave most of it back, and then with the game in the balance with :48 left, Tim Duncan missed an open right handed runner to tie that missed, and his put back didn’t drop either, and that was that.

LeBron James was typically amazing – if that contradiction in terms is possible – scoring an NBA Finals career best of 37 points and grabbing 12 rebounds in 45 rugged minutes.  Dwyane Wade held his own by chipping in 23 and 10.

Those totals were predictable, but what the Spurs didn’t count on was Shane Battier’s 18 points.  His 6-of-8 shooting from beyond the arc was as spectacular as it was unexpected.  Battier scored that many points once this entire season in a very similar effort against the Denver Nuggets, November 15th on 6-of-7 shooting.

Miami never relinquished the lead earned by Chalmers three-pointer, and although the game was always within reach, it never really seemed like the Spurs were going to be able to scale the mountain.  Sometimes a four-point deficit seems like 12, and tonight was one of those nights.

Tonight, Pat Riley’s Heat will celebrate, and tomorrow the decisions will begin.  Will they stay intact for the 2013-2014 season or will they try to deal Chris “Shemp” Bosh, who scored 37 points less than James, and 18 fewer than Battier – zero to go along with seven assists.  His contract is punitive for whoever might pull the trigger, but as long as Donald Sterling (no relation) draws breath, there is always at least one sap willing to destroy a team to land a big fish, even if he’s a carp.

Hell, the Pacers found a taker for Jermaine O’Neal’s bloated deal, so maybe James and Wade can find a way to get Bosh off their backs.

And for the Spurs, this will likely be their last rodeo configured as they are.  Manu Ginobili was actually very good tonight until he wasn’t, and that was the fourth quarter.  He made 1-of-4 shots, and committing all four of his turnovers.

Kawhi Leonard scored 19 and boarded 16 missed shots, establishing himself as a budding star.  He he 21-year-old for whom the Spurs dealt George Hill to the Indiana Pacers was the best player on the floor for the Spurs as he will probably be for a generation.  Maybe in 2027, we’ll be talking about Leonard with the same reverence used for the venerable Tim Duncan.

Danny Green made the most threes in NBA Finals history by the end of Game Five.  Tonight, with all the chips in the middle of the table, he went 1-of-12.  If he hits shots the way that Battier did, the Spurs would have been champs, but there is a lesson here for youngsters – heat eventually cools.  Nobody can continue to hit 65.8% (25-38) of his threes for very long.

The plusses for the Spurs:

Tonight belongs to the Heat, and whether this two-year run becomes three will depend upon the moves made by the Pacers, Knicks, and others in the Eastern Conference, as well as the health of Russell Westbrook and the aging body of Duncan and Tony Parker.

Lot’s of time to debate all that.  The draft is a week from tonight.