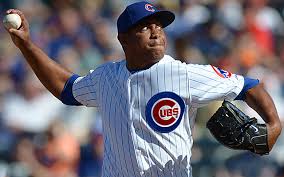 It’s always a little unpleasant to read that a formerly great baseball player has been designated for assignment.  I imagine the manager or general manager calling the player into his office, and giving the player the bad news.  That’s a day that comes for almost all players, and if you have any empathy, there is a bit of a knot in your stomach – even when it’s former Cubs’ closer Carlos Marmol’s turn.

I found out about Marmol from a friend, who said that he “will return to being a Cub fan now that this has FINALLY happened!”  Not sure the removal of a guy can ever make a team better, but at the very minimum, it should be a little less stressful to watch the Cubs without Marmol as a bullpen option.

In 2008, Marmol was virtually unhittable with a great fastball, and a slider that was almost never touched.  The best set-up man in the game that year, Marmol gave up only 40 hits in 87 innings pitched as he earned his only trip to the all-star game.

Even eulogizing this guy.  Marmol’s fastball evolved from a difficult to hit pitch that had great movement to a lick your chops and hack pitch over the past few years, and that was the difference between good and bad Carlos.

Of the flyballs hit off Marmol, an incredible 41.7% left the park for a home run.

All that statistical gobbledigook adds up to unemployment for Marmol, and so it goes for the Cubs.

As though Cubs fans needed a parting gift of another reason to hate Marmol, he blamed the fans for his poor performance in an interview with Enrique Rojas of ESPNdeportes.com via phone from Milwaukee, “I would say that the lack of support from the fans was part of the reason of the mental block that I suffered recently,” Marmol said.

Marmol will sit in baseball purgatory for ten days as the Cubs try to work out a trade.  If not, Marmol can either report to the minor league spot where the Cubs point him, or declare himself a free agent.  If he signs elsewhere, the Cubs will be on the hook for the remainder of the $9.8M he was to make this year – minus the league minimum.

Even if he’s hated now in Chicago, St. Louis Cardinals fans will always have a soft spot in their hearts for Marmol because of a wild pitch he threw with two outs in the bottom of the ninth that allowed Adron Chambers to score the winning run of a game that was instrumental in allowing the Cardinals to earn a wild card berth in the postseason that was nurtured into an improbably World Championship.

One thought on “Carlos Marmol Finally Released by Chicago Cubs, and He Blames Cubs Fans”