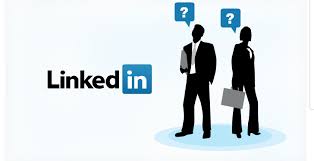 The two people in this LinkedIn logos with question marks over their heads are trying to figure out a use for LinkedIn other than inviting colleagues or accepting their invitations.

LinkenIn is a social media website with a huge stock valuation and millions of members.  I am sent invitations to network with people, join groups, and endorse those I know.

I do all of it.  Near as I can tell, LinkedIn’s primary function is to invite profession people we like, and accept invitations from others.  When bored, I endorse the people I really like.  That’s nice, but I have no idea what good any of it does for anyone.

Forty-two of my connections have endorsed my for my knowledge of radio, 34 for broadcasting, 29 for radio broadcasting, and others for disciplines like new media, social media, and oddly Adobe Audition.  Not sure what good that does, minus the recognition by peers, former managers/employees, and strangers that I know something about a variety of things.  It’s kind of nice, but mostly meaningless.

There are groups who solicit or disseminate insight regarding a number of topics, but I have no interest in either taking the time to share or read perspective shared to or by those with nothing better to do than poke around LinkedIn.

I’m more than happy to talk/email/tweet to anyone about any topic in which someone feels I have expertise, but writing about it on LinkedIn seems both a waste of time and presumptuous.

I do get occasional messages, which are appreciated, but those are few and far between.  Most people use email or Twitter, but any port in a storm is fine.

And somehow this social media site is now worth $15 billion – yes, with a B.  The guy who invented it is now writing books about how to become a success.  I hope one in titled, “Enticing People to Invite Others to a Virtual Party Can Make You Crazy Rich.”