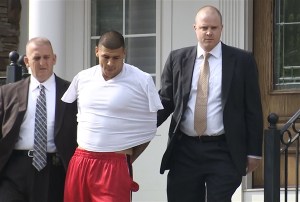 Many will say that the Patriots have acted prematurely, having released Hernandez without even knowing what charges are being brought against their tight end, but this the right move at the right time.

There is no resolution to this story that would allow Hernandez to return to the Patriots as anything but a distraction that would cast the franchise in a very negative light.  Whether the charge is murder or obstructing justice in the murder of Odin Lloyd, Hernandez has no place as an employee of a respectable business.

Evidence needs to be vetted, presented, and argued in a court of law to determine guilt or innocence.  Employers are not held to a burden other than whether an employee belongs in the workplace, and Patriots owner Robert Kraft is the guy who ultimately makes that decision.

Whether people believe the Patriots have acted appropriately will depend upon their level of trust for the work of the media and law enforcement.  Believe in the media, you think Hernandez at the very least is complicit in destroying evidence.  Distrust the cops and media, and you trust in the good nature of humanity and believe Hernandez is being railroaded.

While the media waits to hear what the charges are during Hernandez’s arraignment this afternoon, there will be speculative statements about the perp walk to the police car – do the handcuffs mean that the charges are something other than obstruction of justice?

The discussion has been in hypotheticals since jump street because there was no meat to report, but the public is still very curious about what the hell happened in North Attleboro, Massachusetts, early on June 17th.

If Hernandez is charged with murder, this will likely turn into the O.J. Simpson murder trial revisited.  People will line up on one side or the other based upon whose narrative they believe, and the long trial will engage the entire country until half are thrilled and the other half are outraged.

The victim will be nothing more than a sidebar, just as Nicole Brown Simpson was.  The people who cheered the innocent verdict in the O.J. trial were likely not considering the Brown Family, or how Nicole was virtually decapitated.  Who Odin Lloyd was will only hold attention if that information becomes relevant in this narrative.

Justice tends to be viewed by Americans as a John Grisham novel.  Odin Lloyd’s life is a chapter in the book that the editor will delete because it’s unnecessary exposition.

Whatever the disposition of the case, Kraft and the Patriots have seen enough.