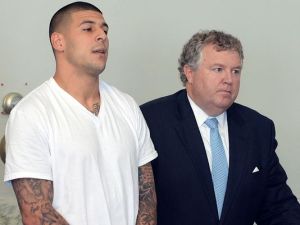 Former New England Patriots tight end Aaron Hernandez was charged with first-degree murder this afternoon, and was subsequently denied bail.  That means an unpleasant and lonely period of waiting for Hernandez, and a worse time for sports fans who would rather talk sports than forensics.

The media has provided saturation coverage of every non-move that Hernandez has made since he was identified as a person of interest in the June 17th “execution style” slaying of Odin Lloyd.

Expect to know a hell of a lot more about Lloyd than the two facts of which we have been made aware – that he was a semi-pro football player, and that he apparently was dating the sister of the woman Hernandez was living with.

Even nine days after the murder, I could pick out Hernandez’s house if I drove by.

Every detail of Hernandez life will be unearthed as we find out why everyone who writes or talks about Hernandez (minus his neighbor, who enjoyed getting ice cream with him) says he’s a bad guy in a way that connotes he did more than gossip about friends.

Ohio State football coach Urban Meyer was Hernandez’s coach at Florida.  There will be stacks of media requests for him.  Patriots coach Bill Belichick will get requests, but he always ignores those.  Bob Kraft will feel compelled to speak at some point, as will NFL Commissioner Roger Goodell, even if only to say that he has nothing to say about an open criminal case.

ESPN is all Hernandez all the time right now (what good fortune for Oregon Football and the NCAA, who gave the Ducks a total pass), and it will likely more closely resemble Court TV than a sports network while three of the four major league sports leagues are enjoying their off-seasons.

Dateline NBC’s Keith Morrison is likely prowling North Attleboro (which is also spelled North Attleborough) for personal interest anecdotes that will either paint Hernandez as a misunderstood and fatherless victim or a brutish man child whose sociopathic tendencies were evidenced in the way he ordered countless double lattes at Erin’s Perfect Cup on North Washington, and in his tequila fueled arguments at Ninety Nine on South Washington.

Whatever you thought you knew about Hernandez, forget it.  Until the appetite of courthouse junkies is satisfied, we will be fed more minutia about America’s newest favorite accused murderer.

Guilty or innocent will probably take 18 months to decide, and until then, it’s alternating between Roger Cossack, Greta Van Susteren, Nancy Grace, Gloria Allred, and every other former lawyer cashing in on niche fame.

“Juror number three traveled to Barbados where she tended to an abrasion on Rihanna’s knee,” or something like it will be uttered by both ESPN’s John Buccigross and CNN’s Anderson Cooper.

Aaron Hernandez won’t enjoy the time between today and the trial, but it won’t be much fun for sportsfans either.

One thought on “Aaron Hernandez Charged with First Degree Murder; Prepare for Another O.J. Trial Circus”