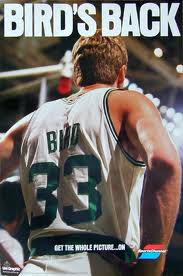 Indianapolis Star columnist Bob Kravitz has reported that Larry Bird will return to the Indiana Pacers in his former role as president of basketball operations.  Current general manager Kevin Pritchard will be the number two guy, and Donnie Walsh will slide into a role as consultant.

This is good news for Pacers fans who like the direction of the team as the current roster was almost entirely built by Bird through drafts and a series of shrewd trades.

Bird left the Pacers one year ago tomorrow to take care of some personal business and deal with a physical ailment.

I love the way Bird talks about himself like the Colts under Bill Polian used to talk about player injuries, and it will be fun to have him back.  There is an accessibility, humor, and self-knowledge about Bird that I enjoy.

Tomorrow night’s draft will belong to Walsh and Pritchard, and then Bird will be in the office starting on Monday.

The Pacers will hold a mostly unnecessary press conference tomorrow at 10a at Bankers Life Fieldhouse to announce the return.

One thought on “Larry Bird Coming Back to Indiana Pacers Monday”