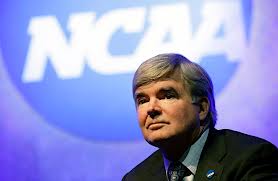 NCAA President Mark Emmert is paid to do a lot more than keep competitive balance in college football, and that’s a good thing.

The NCAA showed its hand today in meting out penalties to Oregon Football.  Those penalties serve more as an affirmation for Oregon’s policies in violating NCAA rules than an admonition, so the question the begs to be asked is why did the punishment for Ohio State Football so badly outweigh that of Oregon?

Here are the Ohio State penalties (in some cases the NCAA added to Ohio State’s self-imposed penalties:

Ohio State received those penalties because Tressel responded with indifference to being notified that players sold or bartered swag including Big Ten Championship rings, autographs, and practice gear.

Oregon received today news that they will receive the following penalties:

In short, Ohio State missed out on a BCS National Championship bid while Chip Kelly will be paid millions to coach the Philadelphia Eagles.  That’s fair in only the eyes of the NCAA.

The differences in the violations is this – Ohio State looked the other way as players were paid, while Oregon committed violations while recruiting that included buying the influence with recruits of a booster who runs a “recruiting service.”

The inference a reasonable person would draw is that the NCAA takes far more seriously infractions involving a player getting a little scratch than it does outright cheating by a coaching staff paid to educate young men about life and football.

The fundamental difference between those two very different transgressions is that Ohio State’s could initiate a bidding war among schools for players, and the other is just a simple violation of trust leading to competitive imbalance.

The NCAA member schools do not want to pay players, even by looking the other way as memorabilia is swapped for tattoos or cash with third parties, any sooner than they have to.  BCS universities will tolerate or even endorse through nonsensical levies the offenses involving recruiting violations.

The overall message to coaches by the ludicrous 18-month show cause order against Kelly is to cheat their asses off to earn a sweet NFL gig, and as long as you bolt before the assessment, you are a big winner.

Anyone looking for morality in college football or the organization founded to oversee it should feel quite stupid today.  For those who have understood since the NCAA was founded that its existence in the realm of creating an even playing field among participants is a charade whose sole purpose is to create a public perception of fairness that in reality does not exist.

More respect would be due to the NCAA if President Mark Emmert brought the rule book to the front steps of NCAA headquarters in Indianapolis and set it ablaze while declaring, “It’s open season on recruits!  Call, pay, doctor grades, hire former pros as old looking players, and work the student athletes like indentured servants.”

It would be the first honest moment there since the doors opened.

The NCAA as a disciplinary institution should be disbanded as a sign that morality in athletics exists.  That would be the most generous educational offering made to student-athletes in its history.