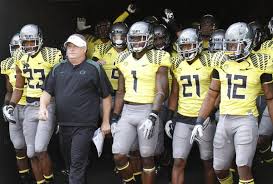 The punchline to the joke the NCAA just told isn’t funny.  Two years of investigating, and nothing to show for it.

Five years ago, Indiana University Basketball was eviscerated due to several impermissible phone calls, but Oregon Football somehow manages to avoid any meaningful penalties after making payments totaling $25,000 to a recruiting service with ties to recruits who committed to Oregon and making 730 phone calls that are similar to those made by Rob Senderoff and Kelvin Sampson at IU.

Ohio State Football got hammered for athletes receiving tattoos in exchange for swag, but Oregon gets a free pass for a lack of institutional control in it’s football program?

This decision reaffirms the belief many hold that the NCAA is in over its head in policing the big business of college sports, and is better suited to monitor those schools who operate outside the BCS sphere.

The very light tickle of a slap from the NCAA to Oregon Football includes three years probation, reduced official visits, coach Chip Kelly’s 18-month show cause penalty, and one scholarship reduction over the next three years.

The show cause penalty is especially meaningless as Kelly has moved on from Oregon to become the head coach of the Philadelphia Eagles.  As long as the professional leagues serve as an outpost for wayward coaches dumb enough to get caught cheating, there is no meaningful disincentive whatsoever in breaking the rules.  Kelly will serve the penalty while earning more than he did at Oregon.

The Eagles job serves as an affirmation that Kelly’s cheating was the right decision, and the show cause, which requires a member institution to show cause as to why a coach should be hired despite his past indiscretions, is nothing more than a bad joke revealing the NCAA as toothless.

This show cause is a de facto ban that will keep Kelly from accepting a job he does not want.

Until there is a penalty that makes coaches stand up and take notice, there will be no respect paid to the rules.  A lifetime ban might be enough to command that attention.

Until the NCAA puts out a rule book that is easily understood and comes with a set of punitive measures that will serve as a significant disincentive, the NCAA will continue to be more a laugh track  than an operation dedicated to leveling the competitive playing field for member schools.

Ahh, member schools, you know what that means?  Universities belong to the NCAA, and the NCAA is governed by its own members.  In other words, the fox is in the hen house.

If the NCAA goes too far in investigating its members, there is every likelihood that the schools will resign from the NCAA to form its own oversight organization with rules and penalties they like better.

With the Ed O’Bannon lawsuit moving forward to a likely conclusion within the next two years, the argument could be moot anyway.  Long story short, if the suit over improper licensing of athletes’ likenesses to the NCAA is granted class action status, all hell could break loose, and the NCAA as we know it might vaporize under the pressure of massive financial pressure.

There is no justice nor potential for justice as long as the NCAA refuses to stand up and make cheating hurt.  The lesson to student-athletes is that cheating makes sense, and given the way the world works make just be the most valuable piece of wisdom they receive in college.