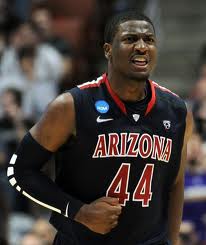 I wrote earlier today that no NBA mock draft would get the Pacers pick right, and that prediction wound up being as prescient as it was obvious.

Solomon Hill is a versatile player who can do some of everything – scored 13 points per game last season for Arizona, and grabbed 7.7 boards per game as a junior.  Hill can hit threes, and as a four-year guy at Arizona, he’s probably a little more mature than many of the underclassmen who came out early.

What this means to the Pacers is that they pick up a versatile guy to come off the bench.  In his re-introductory press conference, Larry Bird said that improving the bench is job 1A, just behind signing David West.  Hill will give coach Frank Vogel a versatile tool to use instead of a Sam Young type player – or specifically Sam Young.

At 6’7″, 220 lbs., Hill is a thick three or a thin four, which is ironic because he dropped 25 pounds prior to his freshman season at Arizona after being the 28th overall prospect in America out of LA Fairfax.  Not sure what any of that has to do with what Hill will do in Indy, but these are the statistics that people tend to spout when there is little else to write.

The most intriguing bit of insight that I have gleaned came immediately after the selection when ESPN’s Jay Bilas compared Hill to Draymond Green.  I loved Green coming out of Michigan State, but the Golden State Warriors didn’t get much out of him as a rookie as Green averaged 2.9 points and 3.3 rebounds per game.

The good news for Hill is that the Pacers bench needs some retooling, according to Bird, and that means opportunity for young and versatile players.

This was not a reach for greatness by the Pacers, and does not qualify as an intriguing selection as Ricky Ledo would have.  This was shooting for a role player, and landing one.

The Pacers aren’t reaching for the stars anymore.  They’re grabbing role players with a specific purpose in mind.