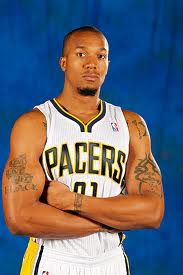 David West returning to the Indiana Pacers is good news.  Paying him $12 million to do it isn’t necessarily bad news, but it walks right up to the edge.

How Pacers owner Herb Simon chooses to spend his vast reservoir of cash is his business.  If he wants to buy DVD boxed sets of the entire “Hogan’s Heroes” canon for every home in the Indianapolis metro, the only people who would have an issue with it would be his heirs.

Spending $12 million for a power forward two years further into his 30s than he was two years ago when he was worth $20 million over two years would seem to be paying retail, but West did nothing during the past two seasons with the Pacers to make anyone think that his talents are beginning their inevitable erosion.

He is as valuable a piece of the puzzle for the Pacers as anyone on the roster.  A very young team last season with two starters at 22 and two others at 26 relied upon West’s leadership during the playoffs to overcome the Atlanta Hawks and New York Knicks in six games each before losing to the eventual champion Miami Heat in seven, and they could ill-afford to take the step back that would come with West heading elsewhere.

But still it would have been nice to see the Pacers with a little walking around cash for the shopping that will continue as the roster is assembled.  C.J. Watson is reportedly in the fold, and rumors persist that they are pursuing Knicks bomber Chris Copeland, Carl Landry, Chase Buddinger, and Carlos Delfino.  Am I nuts or does it seem the Pacers are only interested in players whose first name begins with ‘C’?

Copeland shot it great last season – his first in the NBA as a 29 year-old rookie.  In the series against the Pacers, Copeland was an aggregate +7 while the Knicks as a team were a -10.  He made 11-of-20 three pointers during the series, and cashed on 42.1% of his triples during the regular season.  In ten April games when Copeland saw his most extensive playing time, averaging 25.6 minutes per game, he scored 15.0 points per game.

Anyone who has watched Copeland defend the four knows that he isn’t great at it, but against specific match ups, where he doesn’t get exposed, he could come off the bench and hit shots in bunches.

Carl Landry can score down on the block, and is a capable rebounder/defender, but he is likely to cost north of the $4-million player option he waived for next season.  That’s a big bullet for the Pacers to bite.  Landry would like to play with the Pacers but not enough to give Indiana a discount.  He could be a guy who fits the mid-level exception of $5+ million though. He averages in the low double digits, and pulled down an average of six boards last season as a 29-year-old.

Budinger is a 35% three-point shooter who spent a significant portion of the 2012-2013 season on the shelf with a torn meniscus in his left knee.  He’s going to be a bargain basement guy, but unfortunately in the NBA, teams often get what they pay for.

Delfino is a good defender, who is beginning to show some wear and tear.  The burst is gone, but he has great hands and can still hit corner threes.  He’ll be a $3 million a year (max) 31-year-old as the 2013-2014 season begins, unless someone overpays him.  This rumor is courtesy of Ole, a sports publication and website in Delfino’s native Argentina, and is not shared anywhere else.

These are important days for the Pacers.  The deals done over the next two weeks will determine whether they close the gap on the NBA champion Heat.  Fans tend to look at the Heat as though they were only one game better than the Pacers because of the 4-3 Eastern Conference Finals, but they were 16 1/2 games behind LeBron and Company during the regular season, and that is a truer measure of the difference between the teams.

With better players, the chance to be a better team improves.  This isn’t brain surgery, which is good because Bird isn’t a brain surgeon, but he knows basketball and how to assemble a team.