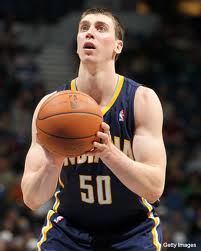 The qualifying offer to former Indiana Pacers back-up power forward Tyler Hansbrough was, as was suspected, an insurance policy in case someone pulled a Brink’s Truck up to David West’s front door with too much cash for the Pacers to match.

So the 2010 first round pick is now free to negotiate with any team he chooses, and the Pacers net an additional $4.1 million to spend elsewhere.  That makes this a good day for both the Pacers, who would rather invest elsewhere, and Hansbrough who would like to find a spot where he might be able to start – an impossibility with West on the Pacers roster.

Hansbrough was a fan favorite because he works hard and because he looks a lot like most of the fans at Bankers Life Fieldhouse, but his offensive game was limited to crashing into defenders and occasionally getting a good roll, a call from a kind referee, or both.

An easy to like guy, Hansbrough made me laugh at the Pacers golf outing prior to his rookie year.  Seated with eight guys in their 40s, Hansbrough set down his plate and joined us.  There was a little talk about the North Carloina/Duke rivalry, and then silence.  After a minute or so, Hansbrough looked at us for a second, and asked, “You guys play video games?”  It was a sweet and strange question, and someone explained that most of us had kids, jobs, wives, lawns, and chores that would keep us far too busy to indulge in video games.

He has always been the kind of wide-eyed kid who seemed oddly out of place in the man’s game played in the NBA, but was always game for a battle.  Hansbrough was a pest, who occasionally got things right enough to give his fans hope for more playing time.

In the end, it wasn’t enough.  Hansbrough will likely catch on somewhere, and the Pacers will sign someone who is more finish and less crash around the basket.

The Pacers now have approximately $43 million on the books for 2013-2014, and with an assumed $2 million for C.J. Watson and another $12 million for West in deals that can’t be announced until July 10th, they are at $57 million.  That’s $1.5 million from the salary cap, but $14 million from the salary cap threshold.  First round pick Solomon Hill will likely cost somewhere just shy of $1.3 million, so the Pacers are for all intents and purposes at the cap.

Last season, the Pacers carried $66 million, so that’s a pretty good guess as to the number they’ll want to hit for the coming season.

That gives Larry another $7.5 million of Herb Simon’s money to use to bolster that bench.