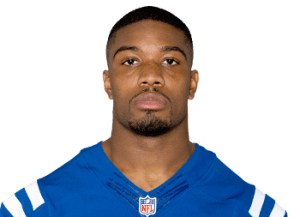 Joe Lefeged is scheduled to appear in court this morning. He was the 23rd Colts to be arrested since 2000, and the 10th in the last five years.

Colts co-captain Joe Lefeged will be in court today answering gun charges.  Yesterday, the Pacers introduced its newest player, who appears to have his screwed on about as well as any 22-year-old possibly could.  And there are reports that the Pacers have come to terms with another good guy in back-up point guard C.J. Watson.

Watson has used his fame and fortune to start the Quiet Storm Foundation, whose mission statement reads, “To have a positive impact on underserved youth by providing educational and recreational opportunities to advance their academic and life goals.  The Foundation advances its mission through three key program area focus. EDUCATION, HEALTH AND LEADERSHIP.”

So a Colts captain is in jail this morning while the Pacers are behaving like model citizens.

This swap of position among major league Indianapolis sports teams would have been unthinkable five years ago, as the Pacers were the team with players shooting up the night at Eight Seconds Saloon and outside the Conrad Hotel, while Colts linebacker Gary Brackett served the community with his Impact Foundation and quarterback Peyton Manning earning goodwill through his name being attached to a children’s hospital.

Beginning with the Brawl in November, 2004, and gradually ending with the trades of Stephen Jackson (January, 2007) and Ron Artest (January, 2006), as well as the bizarre but appropriate limbo Jamaal Tinsley was assigned to by the Pacers in 2008 – when was the last time you heard of an NBA team continuing to pay a player to sit on his ass in Atlanta? – the Pacers were a renegade outfit who lived life by the code of the streets rather than the letter of the law.

More importantly, the Pacers refused to behave to the standards of the fans, whose interest is only recently returning to the team.

Conversely, the Colts with good citizens like Manning, Brackett, Jeff Saturday, Robert Mathis, Reggie Wayne, Ken Dilger, Edgerrin James, and others appeared to be great guys just like the fans.  There were outliers who were arrested for domestic abuse, DUI, and marijuana possession, but the bad was always overshadowed by the good.  The opposite was true for the Pacers.

Now, with Lefeged in court, and the NFL reeling from a spate a arrests this offseason (29 since the Super Bowl), the Pacers are the good guys getting better, while the Colts have grabbed the mantle of those living the thug life.

The Colts rank tied for 11th among NFL teams with 23 arrests since 2000 (Minnesota tops the charts with 40, while the St. Louis Rams are 32nd with only eight, showing that there is no correlation between lack of arrests and wins).  The total for the NFL is 640.

Let’s not kid ourselves about the potential results for the Colts and the NFL.  While the Aaron Hernandez murder charge and the trial to come is not the kind of publicity the NFL likes, it won’t affect attendance or ratings, and the Joe Lefeged gun charge won’t hurt ticket sales in Indianapolis either,

As long as the Colts have a marquee player like quarterback Andrew Luck, they can weather these public relations challenges without the same exodus of season ticket holders that victimized the Pacers for the better part of the last decade.

Here is the list of recent arrests of Colts players during the past five years:

The only arrest on record regarding an arrest of a Pacers player over the past five years was of Lance Stephenson for assault, harrassment, menacing, and possession of a deadly weapon on August 15, 2010.  That was post-draft, but prior to Stephenson joining the Pacers for his rookie season.

If the Pacers have tired of being cast as the thugs of Indy, they have a right to be, although the Colts indiscretions have been mostly harmless – the product of stupidity rather than antisocial or violent behavior.

One thought on “Indianapolis Sports Teams Switch Roles – Are the Colts the Bad Boys of Indy Now?”