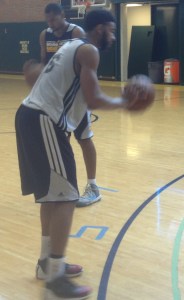 Christian Watford gets ready to put up a shot at the Pacers Summer League Practice today.

On December 10, 2011, Indiana University forward Christian Watford knocked down a three-pointer at the buzzer to beat the top ranked University of Kentucky in a game that announced to the college basketball world that the Hoosiers were back.

Today at a practice for the Indiana Pacers Summer League team, in an interview recorded for “Ahead of the Curve” with Hagan and Sterling, Watford claimed to told the story of the shot “millions of times.”

“Million of times” seems to be an unreasonable claim, and the math bears that out.  To simplify the math and give Watford the benefit of the doubt, we will assume the lowest value of “millions” to be two million.

If Watford had not slept at all since making that shot 567 days ago, he would have to average 2.4495395 tellings per minute since the shot fell through the twine until the moment he was asked.  That’s an average of one telling every 24.6 seconds.

Even worse, allowing for eight hours each day to sleep, eat, and get away from the people who ask to hear the story, Watford would need to up his performance to 3.656 stories per minute or once every 16.4113 seconds.

Logic would tell us that people would be unlikely to ask Watford to repeat the story.  Based upon the 2011 estimated population of 81,381 in Bloomington and 212,413 in his hometown of Birmingham, Alabama, if Watford told the story once to every man, woman, and child in both Bloomington and Birmingham, and would have to find an additional 1,706,206 people to tell the story of the shot – or roughly the entire population of Nashville, Tennessee.

If Watford was especially industrious, he could convene groups of 100 to tell his story of hitting the shot, but he would have needed to speak to gatherings of that size 35.2734 times each of the intervening 567 days.

It is significantly more likely that Watford used hyperbole in his answer to convey the repetitive nature of every interview or chance meetings with boisterous Hoosier fans since December 10, 2011.

That is unless he is counting the number of people who have heard the story rather than the number of time he’s told it.  Given that he won an ESPY for the shot, he is too humble in his estimation.  “Millions” would be technically accurate, but it’s more likely 25-30 million.

Listent to the raw tape of Watford’s claim below, and catch the entire interview this Saturday from 11a-1p on “Ahead of the Curve” with Hagan and Sterling.

[Chris Hagan contributed to the content of this story.]

One thought on “Christian Watford Claims to Have Answered Question About Shot to Beat Kentucky “Millions of Times!””