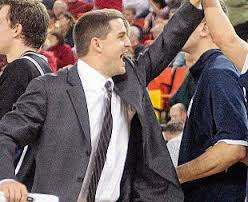 “The Butler Way means that Butler people know best, and Butler stays in house to hire its basketball coaches.  From Collier to Matta to Lickliter to Stevens has been the line of succession for almost a quarter century.  None of those hires has given any reason for Athletic Director Barry Collier to doubt the cycle of success will continue with Brandon Miller as the next head coach of the Bulldogs.

The former point guard for the Bulldogs will take over the reins of the program immediately – just in time for the first evaluation period of July, beginning on the 10th.

Miller also spent time at Xavier, Ohio State, and Illinois.  He returned to Butler to replace Matthew Graves in April, when Graves made the decision to leave Hinkle Fieldhouse to take over the North Alabama program.

Life is about timing, and Miller’s timing was as good as Graves was bad.

Miller was the starting point guard for Butler from 2000-2001 through 2002-2003, leading Butler to three straight Horizon League regular season titles, and a trip to the NCAA Tournament’s Sweet Sixteen for the first time since 1962 as a senior with back to back upsets of Mississippi State and Louisville.

He’s 34 years old, – a little long in the tooth for the job compared to Stevens, who accepted the job at the age of 30.

At many schools, alums and boosters would question hiring a 34-year-old to running the marquee program at their school, especially after the success Butler has achieved under Stevens.  It’s worked pretty well for Butler.

If Miller has any questions about how he should handle tough situations, his boss is right down the hall, and the guy who began this run of incredible success.

Just over a year ago, Miller was coming off a year sabbatical when he took a special assistant position for John Groce at Illinois.  Today, he became the head coach at Butler.

The line of succession at Butler is a little reminiscent of how the St. Louis Cardinals.  The Butler Way is strangely similar to the The Cardinal Way, and the hire of Brandon Miller has parallels with the reasoning used by the Cardinals in hiring Mike Matheny following Tony LaRussa’s retirement.  Matheny took time away from baseball to be a doting father and husband in much the same way Miller left coaching in 2011 because he didn’t want to miss the tee ball games of he sons.

Being a good dad is what mattered most when Miller left Ohio State, and it led him back home where he will now call the shots for his alma Mater.

Life is about timing, and Butler fans are hoping that Miller’s acumen as a coach measures up to his timing in building his career.