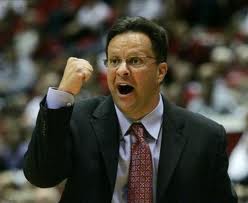 This morning I wrote about the Indiana Basketball program, and how it needed to cover its ears to protect itself from the silent song of the one-and-done player quick fix.

Dante Exum is a gifted basketball player from Australia who is considering an offer from Crean to join the Hoosiers next season for what would likely be a one-year audition for the NBA, but given his eligibility for next year’s NBA Draft, who knows.  Exum might be one of those weirdos who understand that college is worthwhile, fun, and that the NBA will wait.

Draftexpress.com ranks Exum the third best player of those who might declare for the 2014 draft, and likely lottery picks don’t often return to school to exhaust their eligibility.

The decision that awaits Crean is whether he will welcome players so good that if not for the NBA’s absurd rule restricting the age of players eligible for the draft, they would enter the league, or try to focus recruiting efforts upon players who are expected to stick around through graduation.

Indiana’s academic progress rate, as measured by the NCAA, has been a perfect 1,000 for the past three seasons, and athletic director Fred Glass makes sure Hoosiers getting out of their college experience what coaches promise is the law of the land.  The Excellence Academy at IU shows an intense pride in making the collegiate experience pay lasting dividends for student-athletes.

All that said, Crean is the highest paid public employee with a salary and bonuses of $3.16 million for a reason other than making sure the 13 scholarship athletes in his charge at any given time get their degrees and leave Bloomington better men than they were upon arrival in Bloomington (although there are bonuses for APR, team GPA, and graduation rates).

He is paid to win, and the longer Indiana goes without hanging a championship banner next to the five the Hoosiers have earned over the past 71 years, the more fans’ attention will begin to wander toward other men they feel might be better suited to lead IU back to a promised land 26 years removed.

That’s the life of a coach.  The best day is your first, and then it’s mostly downhill until you are handed a severance check.  There are unique outliers like Mike Krzyzewski, but for vast majority, it’s a matter of doom avoidance.  A good coaches credo is, “ask not for whom the bell tolls; it tolls for thee.”

Principle is fine, but talent wins games, and while Exum appears to be exceptionally intelligent – a likely excellent student, it’s his length, quickness, and dexterity that attracts coaches.

It’s unreasonable to ask a man like Crean in a cut-throat profession to do more than he already does.  Indiana demands that the program is built with rigid adherence to NCAA rules, leads the pack academically, and wins.  To enforce a guideline that the wins come from a group of bonafide college students as committed to earning a degree as they are to improve their on-court skill level would almost be cruel, and certainly unreasonable.

Because I am admittedly unreasonable, that’s what I believe college basketball should do at all levels.  The draft eligibility rules should be changed to reflect those used by Major League Baseball – either jump straight out of high school or wait until the end of the third year of college – but I would like schools to hold students to that standard of staying through year three regardless.

Universities are not designed to be an inexpensive minor league for the NBA, and coaches, regardless of their circumstance, should not treat them as such.  To win a championship with a player or team of players who spend a total of eight months on a campus is hypocritical and against the standards for which an educational institution should stand.

While it’s inconceivable to blame Crean or any coach for taking a bite or two out of the tempting apple represented by the kid who only wants to go to college because he has no alternative for the year following his high school graduation, it’s a moral imperative to do exactly that.

I’m well aware that tilting at this windmill is a fool’s errand, but pragmatism has no place in a discussion about what is right for student-athletes who are most often the most visible representation of the conscience of a state’s educational system.

Indiana fans want wins, and they believe Tom Crean was hired to make that happen.  I like to think coaches are hired to enrich the lives of the student-athletes entrusted to their cares.  There are special coaches who can fill both roles.

I’m going to continue to hold Tom Crean and all basketball coaches to that standard.  Whether that means Crean should take Exum or not can only be answered by Crean and Exum.