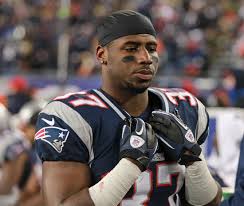 There are different levels of stupid, and New England Patriots cornerback Alfonzo Dennard might have set a whole new standard if he did what cops accused him of – making the decision to get behind the wheel of a car while intoxicated.

Driving drunk, buzzed, or altered is dumb no matter when it’s done, but to do it when on probation for another conviction two weeks after teammate Aaron Hernandez is charged with murder and only a couple of days after the owner of the team through himself on a spit for “being duped” by Hernandez takes thoughtless to a whole new level.

Dennard is a 23 year-old coming off a rookie season that showed promise.  The seventh round pick started six games, and appeared to be making strides in building a positive rep after being placed on probation following his conviction for felony assault of a police officer.

Assaulting a cop also qualifies as egregiously stupid, and calls into question just what the hell kind of standards of behavior the Patriots require of their draftees – as if the draft of Hernandez didn’t already prompt fans to wonder.

Dennard was projected as a second or third rounder for the 2012 NFL Draft out of Nebraska as the Big Ten’s defensive back of the year before that arrest, and lost tens of thousands of dollars as a result.  The loss here for a young man who claims on his twitter page that he is “bless to be in a Situation to help my mom and family,” likely will lose that blessing.

There is no way that a player with such a fundamental lapse of judgment can be trusted to be a part of a team, and the likelihood will be that the Pats feel no option but to cut Dennard once they are convinced of the circumstance of the arrest.

Dennard did make one wise decision which led to another charge – he refused a chemical test, which if positive would have removed all doubt of his guilt and led to a very objective and permanent finding against him.

The Patriots are in no position to look the other way – even in a victimless crime like this one.  DUIs have far greater consequences than the driver’s arrest, so in that sense Dennard is a lucky man, but it is very likely that his NFL career will at the very least be interrupted by a suspension and possibly incarceration for a violation of his probation.

NFL players who weren’t already clever enough to understand that this period between Hernandez being arrested and the beginning of camp is a zero-tolerance period will likely have all doubt removed before the end of the day.