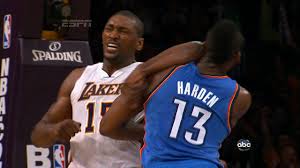 His name might be World Peace, but that doesn’t mean there isn’t rage buried in the noodle owned by the former Ron Artest.

There will be those in Indiana who are compelled to campaign for the return of Player X – the queen bee who started the mess that nearly destroyed the Indiana Pacers with his erratic behavior – now that he has been released by the Los Angeles Lakers.

He was known as Ron Artest when he climbed into the stands to beat the hell out of the guy who threw his drink on him while he laid on the scorer’s table in Detroit.  “The Brawl” ensued, severe suspensions followed, Artest quit basketball to concentrate upon the least successful rap career in history, and fans are still being wooed to return to Bankers Life Fieldhouse.

Pacers President Larry Bird remembers, and that should be enough to keep Artest/World Peace from coming back.  If not, there are plenty of practical reasons to avoid a guy who is very friendly and affable the majority of the time.  He will turn 34 during the second week of the 2013-2014 season, and until last season’s resurgence, he had experienced four straight seasons of reduced minutes and productivity.

When the potential/strange ratio weighed in Artest’s favor, teams were willing to take a chance, and there remain several teams who are a good fit for Artest, but the young Indiana team isn’t one of them.

Players like Lance Stephenson need to be surrounded by positive role models, and while Artest has certainly experienced a lot of what Stephenson has, what he has learned is a source of conjecture.

Artest has reportedly embraced sobriety, changed his name for the honorable reason of prompting 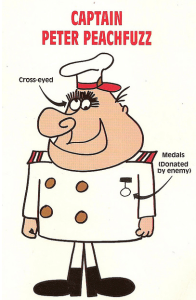 sports fans to think about world peace, and has reduced the number of outbursts when he loses control, but the Pacers will be once bitten, twice shy about inviting their young roster to take a ride on the S.S. Artest, which was piloted for a number of years by Peter “Wrongway” Peachfuzz (the Bullwikle & Rocky character who sailed erratically).

The Pacers can’t take a chance that “Wrongway” will find his way back to the bridge of Artest’s medula oblongata.

Signing Artest would be a bizarre move given the recent success of the Pacers in building a roster that the fans can embrace.  A change agent like Artest could completely undo all the years of work with one misstep, and while Artest is a wonderfully congenial guy 99% of the time, does Bird (or Herb Simon) want to bet the future of the franchise on Artest’s ability to regulate the release of serotonin (brian chemical that can cause violent aggression) into his system?

Can Artest help the Pacers win?  Maybe.  Can Artest cause such massive disruption to a team that it implodes so violently that aftershocks continue to be felt by fans almost nine years later?  Yes he can, and he did on November 19, 2004.  Stark reminders of that night should not be welcomed back.