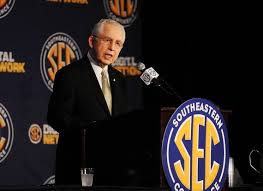 There is a growing disconnect between the legislative body that governs college athletics and the big time programs that generate the revenue that keeps both the NCAA and the conferences swimming in cash.  SEC Commissioner Mike Slive wants change, but not badly enough to do anything but send letters and whine.

Slive’s comments kicked off the SEC Media Days circus that descends upon Hoover, Alabama every year by ripping the NCAA’s anachronistic rules that govern recruiting.

“The current regulatory approach would be more at home in the era of Johann Gutenberg’s printing press than in our current fast‑paced technology‑driven society and will no longer serve to functionally govern recruiting behaviors moving forward,” Slive explained.  “As Albert Einstein once said, We can’t solve problems by using the same kind of thinking we used when we created them.”

But how about taking control of your own conference and instituting your own rules, instead of relying upon the NCAA, which all major conference leaders, coaches, players, and fans feel is an inadequate oversight operation.

Where is it written that a conference can’t do the job which the NCAA has shown itself to be absolutely incapable.  Standing in front of the media to whine about the NCAA is like complaining about the weather – except Slive could part the clouds and cool the heat if he wanted to.

Instead, he invested 1,204 of the 2,581 words of his opening statement complaining about how the NCAA won’t allow schools to foot the bill for the real cost of going to going, the litany of oversight woes, and the academic reforms that give poorly educated freshman a road to success that includes the academic redshirt year that will be used starting in 2016.

The corrective measure for every single problem articulated by Slive would be a just and reasonable expectation of the NCAA, if it operated within a framework of logic and reason.  It doesn’t and everyone with a passing knowledge of college sports knows it, so instead of busting balls like barroom expert with no power to affect change, why doesn’t Slive lead a revolution to change intercollegiate athletics?

He is the head of the most popular conference in college football, and should convene presidents, athletic directors, coaches, and players to get something done within the SEC.

Leading is a lot more interesting and useful than using a bully pulpit or media podium to smack a relentlessly inadequate organization like the NCAA for not doing it for him.

But Slive isn’t only sniping from the cheap seats, he also wrote NCAA President Mark Emmert a letter that outlined a proposed four-part national effort to protect football players from concussions, “One, to conduct further scientific research on cushions.

“Two, determine and refine best practices and standards of care for the prevention and treatment of concussions.

“Three, disseminate information to NCAA member institutions and others with an interest in the health and safety of athletes.

“And, four, continue to review and revise playing rules in football and other sports as new research and new information on concussions becomes available as we revise and refine best practices.

“The point here is that the issue of concussions is not limited to one conference or one region.  We all share the concern about the overall health of college football and its participants across the entire country and within each NCAA division.”

That last paragraph is one of the most miserable efforts at deflecting responsibility for the welfare and safety of student-athletes I have ever read or heard.

The problems with head injuries in football does not rest with the broadest body, but with the narrowest.  Each individual program should exhaust all resources to provide a functional protective barrier between the shell of the helmet and the brain.  Why should that responsibility automatically for to the NCAA instead of the conference?  Why does the apparently inert Slive assume this burdenless position?

He should stop writing letters, stop whining, and start leading.  Someone needs to step up and do the right thing rather than point fingers.

If Slive is going to tell us that the obviously naked emporer has no clothes, he should wear more than a Speedo himself.