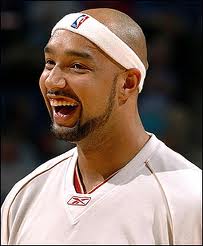 Drew Gooden has reason to laugh today. Sure, he got fired, but he still has $13.4M coming to him.

Drew Gooden has been a hell of a good power forward for a significant part of his career.  The Indiana Pacers need one of those.

When healthy, Gooden can score and rebound, and as a back-up to David West, he makes all kinds of sense for the Pacers.

He’ll be 32 by the time the season starts, but he’s a well-rested 32, after playing sparingly for the Milwaukee Bucks who released him today under the amnesty clause of the latest collective bargaining agreement.

Because of the amnesty situation, Gooden is guaranteed $6.7 million for each of the next two years, but the Pacers would only have to pay the amount of their bid.  The Bucks cover the rest.  That could lead to a bargain as few other teams are likely in the market for a four without a lot of tread left on the tire, who hasn’t played more than 56 games only once since the 2007-2008 season.

In the 2011-2012 season, Gooden showed he had recovered from plantar fasciitis as he filled in for injured Andrew Bogut, and was quite respectable, averaging 13.7 points per game for the season.

Given his age and declining minutes, Gooden would appear to be a longshot to help the Pacers over the hump, but if the price is right, he’s a pro who can play a role behind David West that would give them a better rounded game than the backup power forward he would replace.

Messages left for Gooden’s agent have not been returned.  Messages for the Pacers would be pointless to leave because they will not confirm or deny anything until the deal is done.

4 thoughts on “Indiana Pacers – Bid on Drew Gooden? Why Not!”