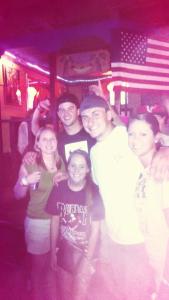 A.J. McCarron and Johnny Manziel in a bar Friday night. If you’re not going to show up for work in the morning, no pictures in the bar the night before.

Johnny Manziel got famous before he was ready for the bad parts of it.  Adulation is not always chosen or well-timed, and sometimes ruins people.  Regardless of whether he sipped lemonade or shot Wild Turkey Friday night before being dismissed from the Manning Passing Academy, Manziel has dealt with fame on roughly the same level as Lindsay Lohan.

This morning at the SEC Media Days madness in Hoover, Alabama, Manziel explained “The spotlight is 10 times brighter and 10 times hotter than I thought it was two months ago.”

The narrative that is developing is doomed to end badly because Manziel appears to be a normal guy with a specific set of talents that do not project well to the NFL.  College players are not currently allowed to monetize their popularity, so Manziel is destined to resume a normal life soon enough.

Lottery winners who are thrust into wealth they neither deserve nor have any inkling how to handle return to their previous economic status.  Is there any doubt at all that once people grow tired of the Honey Boo Boo family’s idiosyncrasies that Uncle Poodle and the whole clan will continue living dysfunctional lives with their momentary wealth a pleasant memory?

That is what is happening to Manziel.  He’s a kid who craves normalcy, and can’t stop talking about how his life is difficult.  To us, his life in College Station is pretty damn good.  He dates a model, goes to the ESPY’s, and throws out the first pitch at Randers games.  To him, it’s virtually unbearable.  Different strokes for different folks.  Some guys are destined to be Peyton Manning, and others work at Tire Barn.

Tire Barn is a fine place filled with great people who take pride in their work and raise great families, but they are not destined for fame.  Sometimes, that’s a choice.  There might be a guy at your local Tire Barn, who if not offput by notoriety could have become the next Brad Pitt, Greg Maddux, or Walter Payton.

Manziel may adapt to life in the spotlight, but few are able to shift personalities with any ease of grace.

If Manziel craves normalcy, he’ll find it, but the trip will be very public and seemingly unpleasant.  He can withdraw from the public eye, sit at the bar with friends, and laugh at life after fans stop being curious about him.

The days when a college quarterback could be a kid with the exception of Saturdays in the fall are long over.  If you succeed at a high level, cop a nickname, and win a historic award, life changes, and not always for the better.

There can be positive aspects of fame, but the experience of fame for most is horrible.  Being recognized, written about, and dissected by a bunch of strangers sucks, but that’s where our celebrity society has evolved.

Idiots like the Boo Boos (or whatever their last name is), Kardashians, and Hiltons is all about acquiring and monetizing fame without talent.  Their willingness to open up their lives has built an expectation that society’s every curiosity is satisfied.

That sucks for people who want no part of it, and that seems to include Manziel.

Twitter and the other various portals social media provides millions of ad hoc reality shows, and if Manziel wants anyone to take seriously his desire to live minus fame, he needs to stop with the tweets and pics from Mexico with friends hauling around half gallons of liquor.  Opening the door a little bit doesn’t work.

Manziel’s comments this morning were typically evasive, and were virtually meaningless, and this afternoon he’ll be on a private jet to the ESPY Awards.  If Manziel doesn’t like fame, I’m not sure why he’s going to the ESPY’s.

If Manziel is one of those who craves the few positive parts of fame, while not understanding how to navigate the negative, his story is not going to end well.