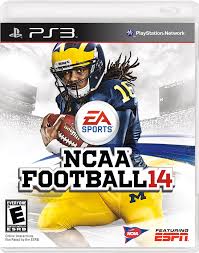 Fans better get their fill of EA’s College Football 14, if the NCAA is just the first to pull its licensing.

The Ed O’Bannon lawsuit has claimed its first victim – the NCAA’s licensing for its name and logo on EA’s incredibly successful College Football series.

This doesn’t necessarily mean the end of the game – just the end of its association with the NCAA.  As the statement from the NCAA reads, “The NCAA has never licensed the use of current student-athlete names, images or likenesses to EA.

“The NCAA has no involvement in licenses between EA and former student-athletes. Member colleges and universities license their own trademarks and other intellectual property for the video game.

“They will have to independently decide whether to continue those business arrangements in the future.”

The disposition of the O’Bannon suit will determine the legality of the clause in the letter signed each year by all student athletes that grants licensing over his or her image to the university forever and throughout the universe.

If universities follow suit in pulling their licensing rather than extend its exposure in the case of a finding or settlement in favor of O’Bannon, collegiate sports video games as we know them will be dead.

O’Bannon’s lawsuit has the potential to be the single biggest game changer in the history of college sports.  In it O’Bannon argues that the universities have no right to require college freshman to cede the rights to monetize their image in exchange for their annual scholarship.

If the court finds in favor of O’Bannon, schools will not be able to sell merchandise or the license to create merchandise bearing the image of a student athlete.