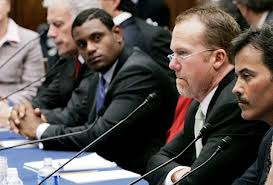 Sosa, McGwire, and Palmeiro looked like lying tools at the senate hearing into PEDs in baseball, but why were they there in the first place?

Colts tight end Weslye Saunders has been suspended for the first eight games of the 2013 season because of a positive test for PEDs.  Ryan Braun, Alex Rodriguez, and at least a dozen others await their fate in baseball’s ongoing crackdown against PEDs, and the induction ceremony at the Baseball Hall of Fame in Cooperstown next weekend is going to be a lonely one as exactly zero players were elected by the Baseball Writers Association of America.

Outside the Hall of Fame are players who have amassed statistical evidence of greatness that would under ordinary circumstances make them sure fire first ballot inductees.

What’s all the fuss?  Everyone seems to be on the same page that using steroids and human growth hormones to gain a competitive advantage is wrong, but why is it wrong?

Lance Armstrong has been vilified for being a cheater and a liar, and the anecdotal evidence that damn near everyone else was doing the same thing seems substantial enough.  Armstrong’s greatest sin was in being the most successful cheater while treating teammates with arrogant indifference.

Why do we care that he doped?  And why do we feel cheated by former baseball players like Mark McGwire, Sammy Sosa, Roger Clemens, and Rafael Palmiero?

The ballplayers did very little that most of us wouldn’t do in the same circumstance.  If you were a talented player with an injury that needed a chemical goose to heal, wouldn’t you do everything you could to get back on the field to allow for that cash flow of millions per year to continue?  And as a fan, did you care that McGwire was popping Ando like Chicklets?

Back in the day, ballplayers swallowed handfuls of amphetamines to get ready to play just like college students have always done to maintain a grueling study schedule.  Do universities test kids to make sure their grades weren’t the result of wolfing down a couple of greenies?

I received an email this morning that frames the argument very well:

I’m not a writer, a columnist, or blogger.  I’m just a fan of baseball.  The lack of inductees this year into the Baseball Hall of Fame is more of a travesty to baseball than steroids itself.  I was a teenager during the steroid era.  I chose not to use steroids to further my baseball career while I was in high school. I definitely needed something to strengthen my arm while I transitioned through puberty.  I knew the risks of steroids at the time (this was 20 years ago), and chose it was not a path I wanted to follow.

With that being said, baseball was in major decline after the strike in 1994.  Attendance was poor and fans were not taking to the game period!  Suddenly, steroids happened and homeruns were hit at a ridiculous amount from Bonds, Sosa, McGuire, Palmero, etc.  What happened?  Excitement was restored to the game of baseball and fans returned.  I’m not an expert, but I knew during my high school, college, and early post-graduate career everyone in baseball turned to steroids (the writers turned a blind eye at the time).  I lived in San Francisco and St. Louis and witnessed the reaction crowds had to the homeruns first hand.

Writers want to be holier thou and exclude these players from baseball, when in reality steroids helped to save the game at that point in history.  I don’t agree that we should exclude these players from the HOF.  They will always have an asterisk by their names because of the generation they played, but there is a reason it is called the HALL OF FAME.  Whether these players are ever inducted into the Hall of Fame or not, they will always be famous in the history of baseball.

Writers need to get over themselves.

I get the outrage people have toward cheaters, but why are PEDs against the rules in the first place?  For the illegal substances, there are laws that have been enacted to prevent use, and punish those who do.

As for the lying that the cheaters employed to stay out of trouble, I have no respect for that at all. They should have stood up and said, “Yeah, I did it, and so what!”  That would be a guy I would put in my hall of fame.

5 thoughts on “PEDs Knocking People Out of Sports – But Why Are They Against the Rules?”