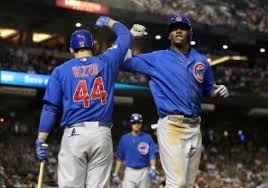 Whether Junior Lake (R) is a flash in the pan, or another building block joining Anthony Rizzo remains to be seen – but not by many.

When Puig went 8-for-18 in his first five games with four home runs and a 1.555 OPS, the national media went bananas.  Every Sportscenter led with Puig’s travails from the night before, and the panel shows took to discussing his historical relevance.

Lake has notched 12 hits in 22 at bats with two home runs and a 1.429 OPS, and it’s crickets from national outlets.

This would be easily explained if Lake played for the Kansas City Royals, a team that I’ve been told is still in the major leagues despite not being seen on ESPN in decades, minus the relentless repeats of George Brett’s tirade following the Pine Tar incident.  Lake would have had a better chance getting a highlight on Sportscenter as an Iowa Cub that as a Royal.

Nothing wrong with that.  I don’t know a Royals fan, and have zero interest in them.  If they popped on through some error in programming judgment, I would likely move to another channel.

But Lake plays for the Chicago Cubs – as in one of the five most popular teams in baseball that represents the third largest media markets in the country.

There has been precious little to excite Cubs fans over the past four seasons, and it’s likely Lake’s return to the mean will be a harsh reminder of why the Cubs chose Luis Valbuena at third and David DeJesus in center instead of the 24-year-old Lake when camp broke in March.  The rookie’s huge start has been a nice respite from the drudgery of mediocrity to which Cubs fans are routinely exposed.

Maybe the anonymity in which Lake has toiled will ultimately be better for him than the harsh spotlight under which Puig was revealed to be a bit of a mope, and a player whose Dodgers teammates appear to revile.

ESPN by its own proclamation is a research company that delivers sports content, so I’m sure they have a good reason for taking a pass on the Lake story, and you can feel free to venture a guess.  Mine is that Junior Lake does not engage a growing segment of the ESPN audience – the Hispanic demographic.  Lake is from the Dominican Republic, but few know that because his name does not make it obvious.

So he’ll keep hitting (or trying to) unbothered by Shelley Smith, Pedro Gomez, Tim Kurkjian, and Buster Olney, and America won’t be bothered by relentless stories about the next big thing.

6 thoughts on “Chicago Cubs – Junior Lake is Yasiel Puig, Minus the Media Circus”