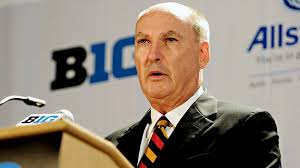 Jim Delany wants the small conferences the hell out of his way, so the Big Ten can make more money and serve student-athletes a little better.

All is not equal in college athletics, and Big Ten Commissioner Jim Delany said yesterday that he wants nonFBS schools out of the way like the driver of a new Corvette wants the mope behind the wheel of a 1974 Pinto the hell out of the fast lane.

Now, he didn’t say that explicitly, but when Delany and the other four commissioners of the five major conferences in college athletics call for stipends to be paid to all scholarship athletes, what he is saying is that not only do small conferences not belong at the adult table for holiday dinners, they don’t belong in the same house.

At the Big Ten/SEC/ACC/Pac-12/Big 12 level, schools have plenty of money to be able to pay the athletes enough to cover the “full cost of attendance.”  They have plenty of money for a lot of things – like $3-$6 million for head basketball and/or football coaches, tens of millions for practice facilities separate from the arenas and stadia, and palaces for non-revenue sports.

The small schools hustle to maintain what they have, and while the big time programs have state of the art academic labs and academic advisors for athletes, the small schools host study table in conference rooms.

Football is played at SEC schools in front of 100,000-plus people, and for millions on TV.  ESPN and the SEC have inked a deal that will pour millions into its 14 conference athletic departments.  The Horizon League is excited that its basketball games are available to friends and families of the players via ESPN3.

To govern the major and small conference athletic departments with the same rule book is madness.

Delany and each of the other commissioners spoke about the need for change within the NCAA, and that was prompted by the small schools voting down initiatives that the big boys championed.  There are more small schools than big, so a democratic one-school – one vote dynamic to govern NCAA D-1 athletics will forever frustrate the current 62 members of the five major conferences.

The commissioners certainly coordinated their messages to simultaneously ring the same bell this week, and for the NCAA, that bell tolled for thee.

They can either move forward by segregating the big and small schools behind tall walls, and allow each to govern themselves, or other options will be pursued.  It’s not easy to get these five groups to sing as a unified chorus, but the idea that they can make more money without input from Mountain West, Missouri Valley, Big East, MAC, WAC, and others is beyond dispute.

The small school, for better or worse, operates as almost purely amateur entities.  They work like dogs to lose less money than the year before, while the Big Ten and SEC print money.

The conversations about licensing agreements, network television deal, and sweat over the ramifications don’t happen on the campus of Loyola University in Chicago, but in Gainesville, Columbus, Austin, and Ann Arbor, radio stations make millions discussing it.

These are two different worlds, and Delany and his brothers in this one battle were right to fire a scud over the NCAA Headquarters this week.

The outcome of the separation will mean that the Corvette can haul ass down the highway unrestricted by the Pinto, and that the pinto is going to have to figured out how to run a little more efficiently.  Both will result in better experiences for the student-athletes.