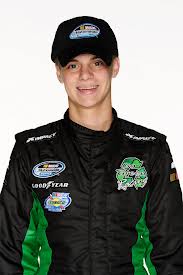 Joey Gase looks younger than he is, but his behavior reflects a maturity few realize regardless of his age.

Joey Gase is only 20 years-old, used to attend races at the Indianapolis Motor Speedway as a fan, and looked forward to running in this afternoon’s Indiana 250 Nationwide Race later today.  His car got loose in Turn One, he hit the wall, and the dream of running at the World’s Greatest Race Course will have to wait for another day.

A guy as young as Gase is will have plenty of chances to qualify for events at the IMS.  What he won’t have to wait for is to use his celebrity to make a difference in the lives of those waiting for transplants.

Gase’s Mom passed away from a brain aneurysm two years ago, and because she had earlier made the unselfish decision to be an organ donor, over 60 people were positively affected by the tissue and organs that were harvested before she was taken off life support.

When Gase gets an opportunity, he steps in front of a microphone and tells his mother’s story, hoping that others might be moved to donate their organs should a tragedy occurs, so that their lives don’t end without improving the length and quality of life for many others.

That’s what being a celebrity can do for those who are smart and generous enough to understand the good that can come from being available to the media.

Of course, people should donate organs they are no longer able to use themselves.  Thousands and thousands of people are on transplant lists for kidneys, livers, hearts, lungs, corneas, and more, and the gift of the phone call to one of them saying that crucial organ is waiting is a life changing event only made possible by the decency of an individual who has his or her eye on the big picture.

That Gase, a barely out of his teens driver in the Nationwide Series, is mature enough to stop by a radio show only minutes after his Donate Life Indiana Chevy got loose and smacked ass first into the Turn One wall speaks to the king of guy he is.   He promised “Ahead of the Curve” co-host Chris Hagan (Saturdays, 11a-1p on 1070 the Fan) that he would do the hit so he could compel the listeners to re-evaluate their indifference to the plight of those praying for a second chance at a better life.  That speaks to the quality of his spirit, and the work his Mom did in raising him before she was taken.

Later in the show today, we found out that Colts wide receiver Reggie Wayne was coming to training camp in Anderson on an Indiana University Lifeline helicopter along with a patient from Riley Hospital is another example of a guy who also understands that the chance to help those in need.

There are so many stories of athletes engaged in idiocy that it’s nice to be able to tell the stories of a couple of people who absolutely get it.

Gase spoke in our interview about the need to grow up fast as both a racer and the son who loses a mother.  Take a listen to this young man, and if you are moved by his story, make the choice to become an organ donor today.