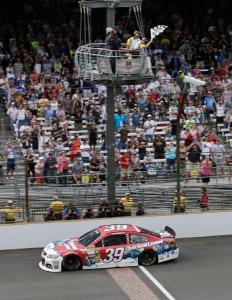 Even at the start/finish line as the checkers flew for Hoosier Ryan Newman, there are empty seats. In turn three, there were hundreds of empty rows.

Getting a ticket to the Brickyard 400 wasn’t easy when the race first came to the Indianapolis Motor Speedway, but it is now.

Habits are hard to break, and traditions don’t die easy, but professional sports franchises and race tracks have to fight the feeling that opening the doors to what has always been popular is enough to get people to sacrifice the cash, time, and energy needed to attend a game or race.

The Brickyard 400 is run on the grounds of a magnificent venue enjoyable to visit without a race to attend, but fans who invest their hard earned money and finite energy to share with friends or family want a return on that investment.

While we aren’t the sharpest tacks in the drawer, fans eventually get the point when those we pay to watch show they don’t give a damn about us, and money spent on tickets is sometimes better used for something else.

Here are the 10 reasons less and less fans show up for what used to be a very popular event:

That’s a long list of gripes, but the bleeding has to stop.  Something cool or memorable needs to happen in the Brickyard 400, or the crowds will continue to decline until they finally reach the point of no return.  No one wants that, but the work needed to rev this event back up is not for the faint of heart.  Giant sections of unpopulated bleachers is unseemly for such a historic venue, and the weather was beautiful this year.

No more excuses, just a lot of hard work ahead.