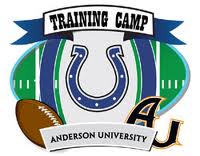 Colts Camp shows fans how some of the best sausage in the world is made.  The Brickyard 400 is some very bland sausage.  One of them is worth the price.

Two years ago when the Rams worked out in Earth City, Missouri, the coaching staff felt good when camp broke.  They were coming off a 7-9 season, and they had bulked up the roster with several veterans, whom were mistakenly thought to be upgrades.  The Rams went 2-14.

Jerious Norwood looked like O.J. Simspon in that camp – or was it Cadillac Williams.  Former Colt Daniel Muir looked like a Pro Bowl tackle.  2-14.

NFL preseason camp workouts allow teams, fans, and the media to see whatever they want to see.  For some teams, it’s fool’s gold.  For others, the gold is real.

The Colts ran series after series of basic plays, and the great thing about playing against yourself is that bad offensive plays can be explained through excellence on the defensive end.  Defensive lapses are ascribed to offensive genius.  And on and on.

Quarterbacks the defense cannot hit tend to be very accurate because they can stand tall in the pocket and throw on their schedule.  Receivers who get four or five seconds to get open should damn well be open, and they better make the catch.

Andrew Luck throws a great ball – whether in games or workouts, and while it’s a little easier to focus when you’re wearing a red jersey, his passes were beautiful.  Even the corner routes that were thrown away looked elegant.  The other thing about Luck is that he never does anything 90%.  The guy seems genuinely enthusiastic about every seemingly mundane moment of every routine practice.

That enthusiasm almost forces the rest of the Colts to step up and make the most of the drudgery, and the beautiful weather today didn’t hurt either.

Enthusiasm cannot be faked.  Players going through the motions from station to station stand out on this team because very few do it.  Some start loping across the field, but because the leaders don’t jog, the laggards move into a sprint.

Does what happened today mean the Colts are closer to going back to the playoffs in January?  No.  It means we are a day closer to seeing them tested against live bullets, and until that happens we don’t have a damn idea who or what this team is – other than Luck appearing to be good enough to win the Colts a lot of games with his arm, feet, and guile.

On the plus side, the admission is free to watch the Colts, who show their appreciation after the workout by signing autographs and talking to fans.  That put the Colts one up on NASCAR, who executed an equally pointless event yesterday, but charged fans a helluva tariff to walk through the gates.

And everyone wonders why the NFL is king.