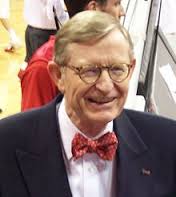 There is something horribly immoral about taking an enormous wad of cash to walk away after failing.

Former Ohio State University President E. Gordon Gee will receive $5.8 million to leave that office.  The cash comes in different forms and at different times, but the total over the course of five years is $5.8 million, and that’s a lot of cake for a guy who couldn’t keep his bizarre sense of humor from disrupting university business several times.

During tattoogate, Gee famously remarked when asked if he was going to fire football coach Jim Tressel that he would be lucky if Tressel didn’t fire him.  Not funny, but not worthy of sending a good administrator to the glue factory.

Handing him a skid of moving crates doesn’t require another delivery of millions and millions of dollars, but the absolute worst thing that can happen to an organization is to be sued, so almost anyone walking out the door is handed a check along with a confidentiality agreement that guarantees tight lipped acquiescence to how screwed up things are.

What do the athletes get?  The young adults who work hard enough to generate the excitement which drives the interest to allows schools and conferences to generate the wealth that pays coaches millions, builds ornate temples celebrating sports, and causes 100,000 plus to the stadia get the pass through expense of the scholarship, room and board, and their athletic equipment.

Gee was the president of the whole university, but his most visible role was as the spokesperson for Ohio State when the athletic poop hit the fan, and his separation from Ohio State was caused in large part by his treatment of athletics as worthy of his best efforts at humor.

The debate over stipends to cover the costs of attending college was brought to center stage during the major conference media days circuses.  Tuition, room, and board don’t get kids food when the cafeteria is closed, doesn’t buy them clothes, pay for travel home, etc…, and many believe that’s a cost the schools should bear.