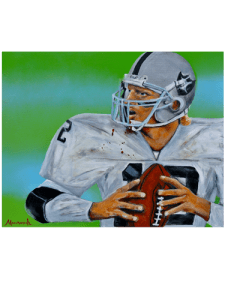 What took Todd Marinovich from stud quarterback to artist who painted this self-portrait is a story Johnny Manziel should hear.

Once upon a time, there was a Sports Illustrated cover story about a high school phenom who was said to have been built as a quarterback by a doting father.  Sports Illustrated published a piece, “Bred To Be A Superstar,” that pealed back the curtain on the young stud.

His dad was one of the first strength and conditioning coaches in the NFL, and he exposed much of his son’s life to the nation in that article.

Nowhere to hide, Todd Marinovich turned to “self-medication” to escape.  The downward spiral included some ups and downs at USC, a three-year NFL career, and then drug induced escape, and a young adulthood spent on a skateboard.

This week, ESPN the Magazine published a behind the scenes look at the family life of embattled Texas A&M sophomore quarterback Johnny Manziel by Wright Thompson.

Paul Manziel exposed some raw nerves that has nothing to do with Johnny Football, and everything to do with a spoiled 20 year-old to whom no one has ever said no.  Paul told Thompson that he believes Johnny drinks to deal with the stress.

According to the media, one dad never said yes, and the other can’t say no.  The two kids suffered as a result.

Marinovich has said the same thing – that drugs provided an escape.  He told us today on “Ahead of the Curve” on 1070 the Fan in Indianapolis, “That shit works.”

Thompson has also said that Manziel is a very likable guy, and so was Marinovich when he took some time to talk about the struggles of being in a fishbowl with no place to hide.

He’s mostly unplugged from the national sports news, but once he was up to speed about Manziel and the Thompson piece, his thoughts were insightful and honest.

If you have the inclination to support a great guy with a wife and two kids (ages 2 and 4), go to toddmarinovich.com and buy a print or original.