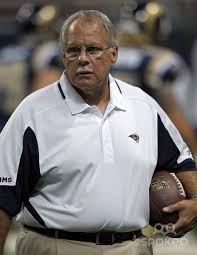 More than four decades coaching gives Rick Venturi a level of understanding of the NFL shared by only a handful.

You want to know something about football – something unique that you can take to conversations about the NFL and sound like you know what the hell you are talking about – listen to former Indianapolis Colts and New Orleans Saints head coach Rick Venturi for a few minutes.

He sees the game differently from fans and media.  We focus on match ups.  Rick sees all 11 matchups at once, and how they all work to create the result of each play.  Combine that with his faculty to explain the game in a way that normal people can understand, and he is one of the best analysts of America’s game.

He’s spent the last week at both Colts and Rams camps, and offered listeners to “Ahead of the Curve on 1070 the Fan in Indianapolis a look at the strengths and weaknesses for the Colts, and how they will matchup during the four games they will play against the Rams, San Francisco 49ers, Seattle Seahawks, and Arizona Cardinals.

Rick was generous enough to spend some time with Fox 59 Sports Director Chris Hagan and me this morning, and you’ll be a smarter fan for listening to his perspective.