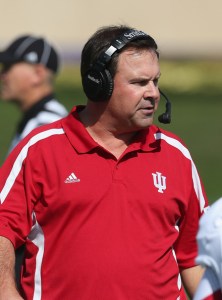 Indiana is practicing on their feet more often in 2013, and that has to be a good thing.

Kevin Wilson is a football coach.  There are other guys who run programs speaking in platitudes, quoting Vince Lombardi, and trying to make the media laugh.  When Wilson speaks, he talks about pad level, work to be done, and how players need to grow up and pay the price for wearing a jersey at Indiana University.

The head coach at Indiana is driven to see his vision of a football team succeed, and he doesn’t suffer anything but maximum effort and on field proficiency.  There is nothing frivolous about Kevin Wilson, and he does not tolerate frivolity from others.

He strikes me as the kind of coach who is cursed while a student plays for him, but is then loved for the life lessons learned under his wing.

Indiana has been a bad football team for a long time.  In fact, the Hoosiers are the all-time losingest team in college football history with 639 defeats to go with 452 wins.

Changing a culture of losing that deep-seated is not the job for a glad handing jokester.  It’s serious work to be done by a serious man, and if Wilson is anything, he’s serious.

Last night, Wilson held court with the media to talk about his third IU team, and below he talks about the biggest difference between the 2012 and 2013 rosters.

Tom Dienhart of the Big Ten Network says the best possible outcome for the Hoosiers is an 8-4 record, which would be an amazing result in the third year of a rebuild.  The worst? a one win slide from last seasons 4-8 to a 3-9 mark.

If I played for the Hoosiers, I would make damn sure we improved from year to year.  I doubt Wilson would take a backslide with a grin.