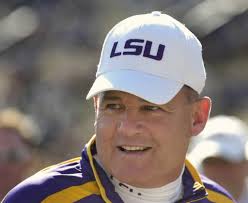 Les Miles, no justice, and more wins. What a great university LSU is.

It’s pathetic.  It’s ridiculous.  It’s weak.  And ultimately it’s unfair to LSU running back Jeremy Hill has been reinstated to the LSU football team because the lesson that could have been taught here was foregone in favor of serving the needs of a coach to continue to win at a program that demands it.

Hill attacked a man in a bar parking lot from behind, knocking him unconscious.  He didn’t just punch him – a smart phone video shows him leaping, striking, and celebrating as the man falls to the asphalt.

Already on probation after pleading guilty to a 2012 misdemeanor stemming from his sexual relationship with a then-14-year-old girl while he was a student at Baton Rouge’s Redemptorist High School, Hill could have been sentenced to jail time.  Why he wasn’t is a mystery of justice gone haywire.

LSU coach Les Miles suspended Hill indefinitely until the resolution of the case, an extension of his probation, Miles hid behind the convenient result of a team vote just hours later to reinstate Hill just in time for the official start of practice, and worse he claims that Hill’s punishment will remain an internal matter.

The shame of the entire ordeal, and so many like it in college sports, is that coaches are only held accountable for losing and NCAA violations.  Players can run wild, and as long as the result is a trip to a bowl and a clean slate in Indianapolis, everything is jake.

It’s a loathsome fact that coaches only give a damn about the welfare and growth of players when it’s convenient and won’t cost the team wins.  In many cases, kids spend four or five years on a campus, are rewarded with an education that is rigged to allow them to graduate without much in the way of learning, and are then sent into the big, bad world to fend for themselves having only learned the value of self-indulgence.

The enabling of anti-social and violent behavior adds a profound insult to the injury of not being paid for creating so much wealth for others.

Miles had the temerity through this ordeal to say the following things:

What a boatload of idiotic claptrap that is.  Hard on him?  You know who this ordeal was hard on?  The guy who Hill clocked in the side of the head with a blindside punch.  How about the 14 year-old girl?

You know how you can tell the weakness in a coach’s character?  When he tries to convince you what he’s good at.  When Miles said, “I have a track record with really disciplining my team.” I threw up in my mouth.

I can’t believe the number of times during the past week I have written, “The consequence must outweigh the punished behavior to affect change.”  There appears to be no consequence here other than running stadium steps or some other nonsensical post-practice physical test that will end just as soon as Miles needs Hill’s legs to be good and strong underneath him against an SEC opponent in the Bayou.

This kind of story is so relentlessly presented that I wasn’t going to write about it until I heard Dan Dakich’s radio show on 1070 the Fan today.  Indianapolis is damn lucky to have Dan guide them through this kind of amoral morass because at least he is holding accountable the idiots who prey on the kids who need genuine guidance in the form of meaningful consequence.

The only mitigating factor in my desire to see Dan lead young men into adulthood through basketball is the way he uses his media presence to serve as an ambassador for decency and justice.

Every time a Les Miles steps out of line, Dan is there to read between the lines and tell Indianapolis what’s going on in the programs that we mistakenly celebrate on autumn Saturdays.

And Miles will cash his giant checks earned for winning while corrupting the soul of college athletics with his self-serving pseudo-discipline.  Keep track of Hill and other Tigers over the next decade to see just how effective a leader Miles is.