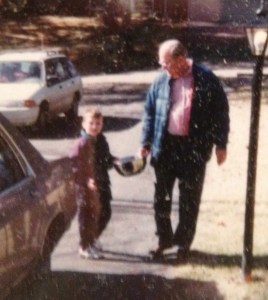 A grandfather goes for a walk with a kid who will start law school in two weeks. That would please him.

My Dad would have turned 84 yesterday, and like most dads, the lessons he taught through his life resonate with me everyday.

He was a larger than life character who laughed a lot – at, with, and around others.  The complete honesty with which he conducted himself was either bold and wonderful or harsh and off-putting – depending upon which side of it you were on.  Dad was volatile and competitive, but also caring and generous.  The void he left when he died still felt.  All that wonderful noise and truth is missed.

Not only do sons learn to emulate some of the best traits of our fathers, they also avoid other behaviors.  Both what to embrace and  important character shaping devices, and the best five of my Father’s lessons are below:

5 – Tell the truth, but don’t be mean – Dad practiced a relentless honesty that felt good when it came in the form of a compliment, but stung when it was critical.  That’s true with everyone, but Dad was especially adept at saying exactly the right thing or precisely the wrong thing.  Dad’s insults were almost always really funny, and for people used to that kind of unvarnished truth, he was a joy to be around.  The recent societal evolution toward making everyone feel special would have sickened Dad. Giving everyone a ribbon makes all ribbons meaningless.  In Dad’s mind, the honest ridicule made the compliments more special.  What was also true was that the honest compliments made the ridicule impossibly difficult for those to whom he told unpleasant truths.

4 – Don’t smoke – Dad’s heart was ruined by the relentless introduction of foul and unfiltered poison from the five packs of Lucky Strikes he consumed each day.  It seemed ridiculous to me at a very young age that anyone would allow themselves to become addicted to something so foul.  Not only did smoking kill my Dad, it made the last couple of years of his life more difficult than it needed to be.  He missed watching his grandsons play a hell of a lot of games because he made the terrible decision to start smoking.

3 – Laugh every day – Oh sure, some of the laughter was at people instead of with them, but Dad laughed a lot, and it was a strong and contagious laugh.

2 – The abuse of power and position should be attacked – Dad loathed bullies in all forms.  Anyone who Dad felt had the power to right a wrong but choose not to either got a letter or visit from Dad.  Anyone who wronged to enhance their position found out that a lone voice of justice sitting at a typewriter in Floyds Knobs, Indiana.  Dad had a very sharp and well-honed sense of justice, was a very good typist, and was fearless in communicating justice.  It was easy to toss away the letters, but the words tended to stick in recipient’s minds.

1 – In youth sports, winning isn’t everything, it’s meaningless – Little league baseball was fun regardless of the result.  Little League teams my Dad coached finished 2-8, 1-8-1, and 4-5-1.  He was relentlessly competitive, but knew that his job was to let the kids have a great time playing baseball.  It wasn’t that we didn’t try like hell to win, we just weren’t very good, and Dad sheathed his usual raw honesty to make sure the kids left happy.

We had a kid named Andre one year who had recently moved from Germany, and didn’t know anything about baseball.  Dad played him in right field, which unfortunately was bordered by train tracks.  When a freight trundled past, Andre would turn and watch the train with his back to the field.  Dad would explain patiently that watching the trains kept him from seeing the play on the diamond, and Andre would shrug.  In the last game of the season, Andre got his only hit of the season, and was so stunned he didn’t know where to run.  Dad guided him to first base, and was thrilled for the kid.

But for the next 30 years, Dad would describe someone ill-equipped for their position as “useless as Andre in right field.”

No one is ever going to devote a chapter in a book on American history to the life of Clark Sterling, but he affected lives of people he met, and left a legacy of laughs and lessons that will stay forever with those who paid attention.