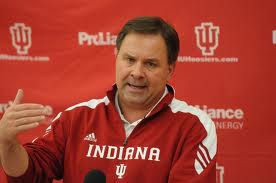 Kevin Wilson is still smarting over the crowd a year ago for the Indiana State game.

Indiana football coach Kevin Wilson spent roughly 98% of his energy during a meeting with the media honestly assessing his players.  The rare exception was in ripping fans who chose not to show up for the game last year against Wisconsin in a game that might have sent IU to the Big Ten Championship game.

The barb came during an explanation about why Indiana chose to open this season against the Sycamores on a Thursday.  It has a lot more to do with prep time for the option attack of the Navy Midshipman than an effort to fill Memorial Stadium.

It would seem silly to need to remind Wilson that building equity with a fan base used to entrenched mediocrity – and mediocrity is the kindest work for it – will take a lot of time and solid play.  Indiana lost to Wisconsin 62-14 in the game Wilson wanted a filled stadium.

Wilson and his staff should personally thank the 24,000 who did show up than rip the 28,000 who had something better to do last November.

Believing in Wilson’s ability to build a program Hoosier fans can be proud of is quite a leap of faith after the track record of Cam Cameron, Gerry DiNardo, Terry Hoeppner, and Bill Lynch, requires a leap of faith that more than 24,000 people haven’t been able to muster quite yet.

It seems Wilson is on the right track as the level of recruits continues to improve, but indulging in a dig against fans who are waiting to see improvement is a little impudent at this phase of the game.  If Wilson feels a lack of support, he shouldn’t take it personally.  No coach since the late Bo McMillan has left Indiana without a losing record, and he’s been gone since 1947.

Building trust is going to take time and a level of play not seen at Memorial Stadium in more than 20 years.  The next time Wilson sees empty seats and feels anger toward those not occupying them, he should take a deep breath and understand just where it is he coaches. Filling them is going to take better than a close game against Indiana State after a one-win season.

Here are Wilson’s comments, which are mostly a message of respect toward Navy.

“This is Indiana” means different things depending upon the sport being played by student-athletes in Bloomington.  Last November 10th, what it meant drew 24,000 to Memorial Stadium.  Wilson’s job is to change that, not whine about it.

(ed. note – The post was edited to reflect that Wilson was talking about the game last year against Wisconsin, not Indiana State when he complained about the 24,000 in the stands, not the 2012 opener against Indiana State.)