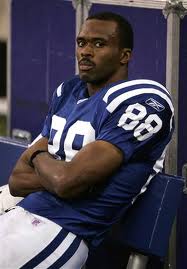 Retired Indianapolis Colts receiver Marvin Harrison will be a member of the Pro Football Hall of Fame, and be forced to speak in public, a task he will loathe more than dropping a sure touchdown pass thrown by longtime partner in crime Peyton Manning, but that will have to wait at least a year.

Bob Kravitz wrote a piece for the indystar.com today that pledged Harrison’s election to the hall in his first year of eligibility is a fait accompli.  It isn’t, and it won’t be.

The logjam at receiver was broken a bit this year by Cris Carter’s induction after six years on the ballot, and right or wrong pecking order matters in the minds of the 44 men who decide the validity of the nominations.  Carter and Harrison are statistical brothers who both lacked popularity in the media.  They aren’t exactly the same guy, but Harrison has a whole lot more in common with Carter than he does with the last receiver to gain entry in his first year as a nominee, the incomparable Jerry Rice.

Incomparable isn’t just a fancy word defining Rice’s quality as a receiver, it’s also an important designation among the voters trusted to debate and vote for each class.

Harrison is a top five modern receiver without question, and very deserving of a bust in Canton, but if Harrison goes in on his first attempt, then Terrell Owens will have to, and then Randy Moss too.  All are a bit nuts in the way many great receivers are, but the hall’s voters will not want to group those three kookaloos with the sane and splendid Rice.

There are also the candidacies of Andre Reed and Tim Brown to consider.  Reed has been defeated through the process as a finalist for seven years, and with Harrison, Moss, and Owens coming online, his best chance for the bust he deserves will be in 2014.

Tim Brown and Isaac Bruce may be on the outside looking in for awhile, but not Reed.

Harrison was a pro’s pro during his 13 year career, but not at the level of Rice, who may wind up being the last of the first ballot receivers – unless his stupefying numbers and record of winning is equaled.

Here is a look at how Rice, Harrison, Moss, and Owens compare in receiving statistics:

Rice is the all-time NFL leader in yards from scrimmage, touchdowns, all-purpose yards, and playoff games.  So incredibly dominant in all categories is Rice that there must be some level of honor that is reserved specifically for him, and first ballot hall of famer is the only port available.

Harrison while a magician in both getting open and staying clean of major collisions, is one of several.   Not that is should matter, but among the media there is no separating the professional from the personal, and Harrison was difficult.  Unpleasant men tend not to get the benefit of the doubt from the media when it comes time for honors.

I’m afraid Tim Brown and Isaac Bruce may have a significant wait to get in – if they ever do.

I will bet Bob a steak at Mo’s that come February, 2014, Marvin’s name will not be among among those who are invited to the big party in Canton that summer.  Bob’s good company, so either way I win.  The beef (non-Kobe as neither of us is compensated to our true value) will taste a little bit sweeter if Bob has to dip into his dusty wallet, but it will be a good night regardless.