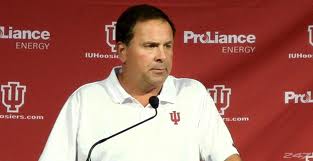 Most of the principles of winning games regardless of the sport are fairly simple.  You will make more open shots than contested shots; getting people out with a fastball is helped by a good off speed pitch; and the ability to pass effectively is dependent upon the ability to run – and vice versa.

Indiana head coach Kevin Wilson understands that the key to scoring points in football through the air is keeping defenses honest by running the ball well.

Second and five is better than second and eight because throwing against a nickel package is tougher.

When the field is shorter, running is key.

Wilson gets all of that, and talks about the need to run the ball better in order to be as productive as he would like the Hoosiers offense to be.

At the 1:36 mark on the video, Wilson’s cell phone rings, prompting an amusing reference to former basketball coach Kelvin Sampson.