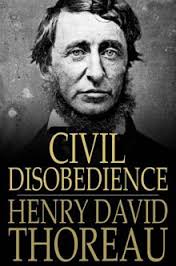 Disobeying isn’t just for petulant seven-year-olds. It’s the best way to cause change.

It’s hard to list the ways the NCAA is losing control of big money college athletics and the kids whose efforts comprise the product.  The NCAA, schools, coaches, and local businesses make fat cash because kids work tirelessly to compete on Saturdays in the fall.  The kids are allowed to attend classes at no charge as their sole compensation.

Regardless of the value of their brand, the student-athletes are restricted from monetizing it in any way.  The schools and NCAA on the other hand, eagerly sell all kinds of swag featuring the image of those brands.

Last week, the NCAA pulled all merchandise from their online store after ESPN analyst Jay Bilas, also an attorney, outed them for their eagerness in profiting from the images of players.

Schools continue to sell jerseys representing players, and the kids don’t get a dime other than the pass through expense of tuition and room and board covering an education for which many have no use.

But the kids are wising up.  Heisman Trophy winner Johnny Manziel is being investigated for signing more than 4,400 items in exchange for cash.  That’s a blatant violation of enough NCAA rules that if proven true, Manziel is almost guaranteed to lose his remaining eligibility.  His only saving grace is that the NCAA has no subpoena power, meaning it cannot compel testimony.  Proving that Manziel took cash or a promise of future cash may take enough time for Johnny Football to wrap up what is damn likely to be his final campaign anyway.

Then, the NCAA will penalize Texas A&M with forfeited games and other restrictions that will have no effect on Manziel – just the folks he leaves behind.

It’s beyond dispute, among most, that the construct of collegiate athletics is unjust to its core.  The powerful profit, while the workers toil for scraps.  What a wonderful irony it would be for these preyed upon cogs in the corrupt machine of college football to take a course in which it was mandatory for them to read “Civil Disobedience” by Henry David Thoreau.

Most people have vague associations between Thoreau and Walden Pond, but have little understanding of how relevant his message would be today as college athletes serve as a repressed minority.  What would Thoreau advocate for athletes?

He would almost certainly see Manziel as a hero for opposing the corrupt rules that serve only to restrict the right available to everyone else – to sell their likeness and profit from their brand as they see fit.  Thoreau would encourage others to do likewise as the rules would certainly change were they ignored by all.

So using quotes from Thoreau, we ask him about college football, and the NCAA as a governmental institution:

The NCAA has become a tool of profiteering institutions who work as hard to repress student-athletes as regulate competition.  What should athletes do to combat the machine that crushes their ability to be compensated at the level of their value?

“If the machine of government is of such a nature that it requires you to be the agent of injustice to another, then, I say, break the law.”

What can be done to change the construct of college athletics?

“Things do not change; we change.”

What could NCAA President Mark Emmert say that would give you hope that the NCAA is headed in the right direction?

“Rather than love, than money, than fame, give me truth.”

What gives you hope that the NCAA might be able to reform in a way that makes it worthy of trust as an oversight institution for college football and men’s basketball players?

“There is one consolation in being sick; and that is the possibility that you may recover to a better state than you were ever in before.”

What advice what you give the athletes who are restricted by the NCAA?

“A minority is powerless while it conforms to the majority; it is not even a minority then; but it is irresistible when it clogs by its whole weight. If the alternative is to keep all just men in prison, or give up war and slavery, the State will not hesitate which to choose.”

Thoreau was a smart guy who inspired Gandhi, Martin Luther King, and others who chose rather than to engage in physical confrontation to not conform to the requirements of the powerful.

If every college football player accepted cash for signing autographs, the NCAA would be powerless to punish any of them.  Manziel is easy prey as long as he has no compatriots.

College athletes should seek out ways to break the unfair rules that restrict them from being fairly compensated for their work and financial impact on a university and the NCAA as a whole.

Instead of recoiling from autograph brokers, they should embrace them.

I doubt Manziel has ever heard of Thoreau, and if he took cash it was more likely about enjoying the benefits of the financial gain than making a statement against the oppression of his peers, but in today’s society, we can’t be choosy in selecting our heroes.

Those who disobey bad rules should be embraced, not punished.