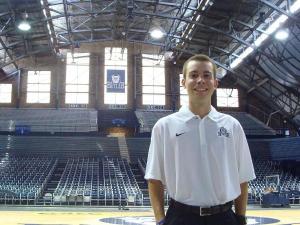 Mark Minner has worked hard in secondary roles broadcasting Butler and other sports events, and stands at the crossroads of good fortune and opportunity as he has earned the gig as a play-by-play voice in the Big East.  He’s a member of the Butler Class of 2012, and as anyone with a passing knowledge of Butler knows, outsiders need not apply.

That narrowed the herd of applicants, but there is absolutely nothing at all wrong with hiring a youngster to describe college games.  In fact, I love hiring some youth into what is mostly a good old boys club of broadcasters.  Big time jobs rarely open, and when they do, a line of 58 year-olds forms around the arena.  Nothing wrong with 58 year-olds, but media needs some young blood.

“Mark has been a key piece of our Athletic Department since he enrolled at Butler five years ago,” said Associate Athletic Director Mike Freeman.  “He has great talent as a broadcaster and is an incredibly driven person. Teaming Mark with color analyst Nick Gardner will keep our broadcasts at a passionate and professional level that our fans are used to.”