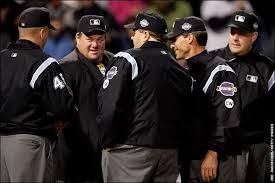 Every call on the field may be reviewed if a proposal submitted to Commissioner Bud Selig by Major League Baseball Executive Vice President Joe Torre is approved.

What a nightmare.  I’ll pack a pillow next time I attend a game.  That’s exactly what baseball needs is another reason to slow the action even further.

Baseball – and any event for which tickets are sold – must be about the satisfaction of those who buy tickets, and for more than 100 years baseball was a very popular game without the introduction of insidious replay to determine the accuracy of home run calls.

Now, if Torre gets his way, every call but balls and strikes will be subject to review.

And that is ridiculous.  Getting calls right is of urgent importance to whom?  Players, managers, and gamblers?

Perspective is needed when discussing reasons to slow down play, and that’s not a problem that only baseball owns.  NFL games are delayed again and again for minutes on end as referees review calls.

They trot as far as 80 yards and back on their way to the monitor, which inexplicably is stationed on the 20 yard line, and the referee watches the replay himself while the video is played over the Jumbotron for the fans, and the booth officials have already seen the play a half dozen times.

You couldn’t design a more complicated and time-consuming protocol for review that didn’t include running to a concession stand for a cup of coffee.

Both the NBA and college basketball games end amid a bizarre and entirely unnecessary ritual of reviews to check the clock and correct possession calls.

Baseball wants to head down the same slippery slope of either allowing managers to challenge calls, or routinely take a look at all calls throughout a game and correct those that the umpires blow.

The world will go on either way, it will just go on more slowly if this wrongheaded proposal is adopted.

At some point in our society, we decided that everything must be done correctly every single time regardless of the meaninglessness of the outcome.  Parents, instead of applauding a score of 97 on a math test, demand to know why their kid missed a lone problem.  Cities spend tens of thousands of dollars to install cameras at intersections so that people who (GASP!) don’t come to a complete stop before making a right turn on red are issued violations.

There is not art to correct.  There is no elegance in perfection.  And there is no debate in absolutes.

Sports are all about those things, and when we decide that the exactitude of officiating is more important than the enjoyment of watching the game, the pigs are in the tunnel.

Spectator sports are doomed if the motivation for the continued expansion and intrusion of replay continues.  Americans will have perfectly officiated contests that will be played in empty stadia.

Correcting problems that don’t exist seems to be a fascination in American life these days.  Think back to every sporting event you have ever watched.  Did you wake up the following morning in a different way or place because of a good or bad call?  Sports are supposed to be a diversion for the mundane need for perfection in our workplaces – not an extension of them.

Go to the game, relax, drink a beer, and don’t worry so damn much about whether the well-meaning guys officiating the contest are any more perfect in their jobs than the players are.

Some problems are meant to be corrected, and others actually enhance the enjoyment of the effort.

Men covering each base doing their best to accurately get the call right, and move the game forward is good enough for me.