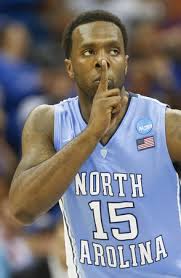 P.J. Hairston is likely pleased that Roy Williams isn’t answering questions about his penally. Once articulated, it can’t be adjusted for good behavior.

Teens go to college to learn about math, science, and the arts, but the true value of higher education is usually tied to the life lessons they extract from the rewards of the good choices and the consequences of the bad.

P.J. Hairston made some strange decisions over the summer, and the lesson he’s learned is that if you are the best player for a team coached by a guy who earns more than $2 million per year for winning games, the coach isn’t enthusiastic about meting out penance.  Nor does he evidently enjoy questions about it.

While Hairston is suspended indefinitely for his series of missteps – misdemeanor marijuana charges and driving without a license in June – charges were dropped after he completed a drug assessment program (a gun was also found outside the vehicle but was not tied to Hairston).  The car was a loaner from Fats Thomas, a man who has been tied to cars driven by Hairston before during a traffic stop.

Hairston was then charged with speeding and careless and reckless driving in late July on his way to Charlotte July 28th.  He was going 93 in a 65 mph zone in a 2008 Acura that apparently had not been rented by Fats.

When a coach doesn’t want to talk about something, it usually means that he knows he’s going to be hammered for what the answer would be.  In this case, it’s the indefinite suspension that might keep Hairston from playing meaningful games, and then again might not.  A responsible media doesn’t let a state employee get away with vague answers to specific answers – nor should they.

College is a wonderful incubator for developing adults in an environment where mistakes aren’t penalized as harshly as in real life, but Hairston’s complete lack of ability to understand that actions have consequences puts Williams in a spot where continued irresponsibility by Hairston will be owned by Williams.

After the first mistake, the rest are owned by the coach.  Given the relentless media reports of academic fraud emanating from Chapel Hill, it’s logical to think that Williams might flex his muscles to show that he’s not running some renegade program.

The NCAA is investigating the Fats/Hairston connection to see if the convicted felon is supplying impermissible benefits to Hairston.  Interestingly, Fats was also connected to the Duke Rape Case as a bouncer of the club from which the strippers were hired.

It’s easy to understand the logic of selected morality for star players, and a coach’s willingness to see the good in a kid who chooses poorly now and again, but a man in charge of the most visible part of a taxpayer subsidized university owes those investors a specific explanation of the penalty assessed to a kid whose behavior reflects poorly on the institution.