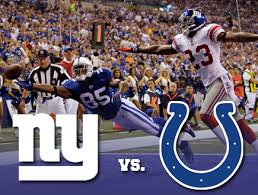 Jim Irsay’s tweets were no more meaningful to the result of tonight’s win at MetLife Stadium than the super fan in Eagledale who watches from the same barcalounger in his lucky and faded Tony Siragusa jersey.

The Colts won for a few reasons – the defense didn’t allow a touchdown, and Reggie Wayne caught a deflected sure-thing-interception in the end zone for a touchdown.

The Giants ran two more plays for three more yards, and had the ball for 10 more seconds.  This was a close game – a really close game – the kind of game the Colts won again and again last season on their way to an 11-5 record, and now there is a crazy reason from Jim Irsay to take credit for it.

His tweet after last week’s meaningless loss to the Buffalo Bills was ill-conceived and unnecessarily peeled back the curtain of managerial communication in the front office:

Many starters played briefly or were nursing little injuries,but it was a crap performance,my apologies/My commanders got n earful from me!

There is a tendency to see a cause and effect between our actions and the result, regardless of the absurdity of the connection.  Cubs pitcher Travis Wood had a no-hitter into the fifth inning earlier this year, and broadcaster Len Kasper called attention to it.  I sent him a tweet that thanked him for jinxing it, and the next pitch was lined in center for a base hit.  Kasper said he was getting killed on Twitter, and refused to apologize.  CBS Jim Nantz mentions the number of times in a row an athlete does something, and the next time the guy misses.  I was absolutely certain that the playing of Van Halen’s “Jump” was the cause of every bad thing that happened to the Cubs in the 1984 National League Championship series.

That the song was undoubtedly being played at some point somewhere during every pitch wasn’t lost on me, but when they fired it up in Walnut Knolls D-Building, Steve Garvey went deep, a grounder went through Leon Durham’s legs, and San Diego celebrated.

The Colts were a better team tonight than they were last Sunday, but the Colts will still be 0-0 until pads crack with purpose on September 8th against the Oakland Raiders.

On August 18th, it still feels better to win than lose, but as long as it’s true that the Colts went 4-22 while following that wretchedness with regular seasons of 75-21 and a 1-1 record in the Super Bowl from 2005-2010, the preseason is totally without predictive value.  And it is true.

As I’m writing this, Irsay felt compelled to weigh in:

That's more like it..there r sum that shrug off losing,even at checkers;they'll never wear the HORSESHOE or touch the Diamond's of Champions

Losing in the preseason served the Colts very well during that era.  I would argue that overreacting to losing (or winning) is a far more destructive behavior than accepting an occasional loss with good humor – even at checkers.

The point those who’ve been critical of Irsay’s initial tweet – the one posted first in this post – is that it’s fine being pissed off after a loss like the Colts suffered at the hands of the woeful Bills as long as you don’t air dirty laundry in public.

That’s what Jerry Jones does in Dallas, and while it has made Jones a huge celebrity and the face of the franchise, it has caused distraction in the franchise, and distractions are not productive.  The Cowboys have defined mediocrity over the past 15 years, and the reason stares back at Jones every morning when he shaves.

If nothing else, Irsay is giving the preseason a context that makes it more entertaining, and for that I thank him, but stop with the pithy tweets.  They might not hurt your team, but they sure as hell won’t help.

Only my family wearing their lucky Colts hats during every game, and switching seats every time an opponent scores can push the Horseshoes to victory.