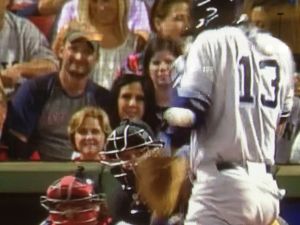 Alex Rogriguez winces as a Ryan Dempster fastball connects with his ribcage.

New York Yankees third baseman Alex Rodriguez is not just a cheater, but an ass.  Not only did he use PEDs, according to Major League Baseball’s investigation, his representatives have reportedly named names of others who used PEDs, and he continues to fight a suspension that is just.

He continues to play for the Yankees until the appeal of the suspension is heard and ruled upon, so Boston Red Sox pitcher Ryan Dempster stuck a 92 mph fastball in his ribs last night during Rodriguez’ first trip to the plate in the top of the second inning.  Good for Dempster.  That’s baseball.

There is room for frontier justice in baseball, and Dempster as one of the best men in the game is the perfect judge, jury, and executioner to let Rodriguez know that not only is all not forgiven, forgotten, and normal – there is lasting resentment seared into the hearts of ballplayers for Rodriguez’ behavior.

Rodriguez is a pox on the game, and regular reminders that he has no business on a diamond are warranted.  If Commissioner Bud Selig can’t keep Rodriguez from playing, then pitchers can make it miserable for him.

A lack of respect for the games requires a consequence, and Dempster brought it as best his 36 year-old right arm could.

Rodriguez appeared stunned, hardly surprising given his relentless squirming and wriggling to avoid the penalty for the self-centered mopery represented by using PEDs.  Then he righted the ship, made a great swing in the top of the sixth, and hit a rocket deep into the Boston night for a home run.

That’s baseball.  There is no need for Joe Torre or Selig to insert themselves into this fracas.  Dempster acted, and Rodriguez reacted.  Each loudly made his point, and the conversation ended with Rodriguez getting the last word.

Baseball is a men’s game played by tough guys who have a strong set of beliefs.  Those beliefs have led Dempster to work harder raising money for charity and to give special children smiles than the combined work of most entire rosters, so if Dempster felt the need to reach back for a little extra to remind Rodriguez that there are people in the game who know a weasel when they see one – good for him.  Dempster has built enough equity to make that play if he feels it’s necessary.

And while we’re passing out plaudits, I liked Yankees manager Joe Girardi busting a gasket all over home plate umpire Brian O’Nora when he issued warnings to both benches after Dempster’s fourth inside pitch finally connected.  Girardi was passionate in his defense of a ballplayer he could easily and justifiably abandon.

Ironically, Girardi called for Dempster to be suspended during his postgame media gathering, “”I’ll be really disappointed if he’s not suspended where he misses a start. They have a lot of days off and you could finagle something, like if he took the suspension tomorrow if he got suspended he wouldn’t miss a start. It has to cost him something.”

“It has to cost him something,” probably captures the thoughts ringing through Dempster’s head as he made the decision to hit Rodriguez.

The Red Sox and Yankees have seven more games against each other this season, and while these relentless ESPN broadcasts of Yankees vs. Red Sox games are an annoyance to the rest of the country, the next one will be must-see-TV.

Justice was served last night, but the trial likely isn’t over.

8 thoughts on “Ryan Dempster Does Right Thing in Drilling ARod, and Oddly, So Does ARod in Drilling a Dempster Fastball”