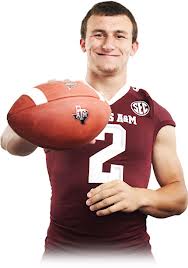 Johnny Manziel – how could a kid who looks like this just be a sleaze who grabbed a bunch of cash?

When I filled in for Michael Grady last Thursday and Friday, Joe Staysniak and I didn’t take many calls, and there was one I didn’t take on purpose.  The call screen gave a name and the question he wanted to ask, “What if Johnny Football was black?”

I avoided it for two reasons – I had never considered that question, and because Michael as an African American would provide a more interesting answer than I could.  Since I saw it on the call screen, the question of what my response would be if Manziel was a black man accused of profiting from signing autographs has rattled in my mind.

Manziel has become a bit of a hero to many who view the business model employed by collegiate athletic departments as outrageous.  The athletes earn the opportunity to go to school for free in exchange for agreeing to play a sport and signing over their rights to profit from their image.

Write a check for $20,000 to the Texas A&M Athletic Department, and you get to sit at Manziel’s table at a preseason dinner.  If the table seats 10, the school gets $180K.  Manziel gets to go to chemistry class without paying.

If someone would like to convince me of the justice in that deal, I’m all ears.  Manziel supposedly signed 4,400 items for autograph dealers, and only a thick wad of cash would motivate anyone to perform a task that mind numbingly tedious.

So, for the sake of discussion, let’s assume Manziel did all that he is accused of.  Now let’s assume he’s not a self-impressed rich white kid from the land of “Friday Night Lights,” but a poor black kid from Ohio swapping his autograph for tattoos.

When I heard about the Ohio State players who signed autographs and gave some jerseys and pads to a tattoo artist in Columbus, I thought Terrelle Pryor, Dan Herron, DeVier Posey, Mike Adams and Solomon Thomas were idiots for jeopardizing their eligibility over tattoos.  The morality play that I have concocted to explain Manziel’s decision paints the NCAA rule book as the bad guy, and Manziel as some rogue who unwittingly is causing a correction in the ongoing injustice of student-athletes owning their likenesses was absent from my thoughts.

I had no such narrative in mind for the Ohio State kids.  While I hope that has nothing to do with the races of the protagonists, it certainly does.  It’s easy to view the Ohio State group as disorganized knuckleheads because the compensation was ink for their signatures instead of cash, but the principle is the same.  It doesn’t take a deductive reasoning expert to see the similarities in the two groups of incidents.

In my mind, I don’t have a racist cell in my body.  I have never thought of the color of a person when evaluating his or her character, but without knowing Manziel or the ink stained fellows at Ohio State we tend to create a visual narrative in our own minds for each episode.

For the Ohio State kids, my mind takes those kids to a tattoo parlor that would fit very easily into an episode of HBO’s “The Wire.”  Manziel has become a combination of “Friday Night Lights” characters Tim Riggins and Matt Sarecen as the son of car dealer Buddy Garrity.

But that’s not all.  The scene where Manziel allegedly is met by the autograph dealer while with some friends in the Ft. Lauderdale airport where they landed on their way to the BCS National Championship Game.  That is straight out of “Entourage” with Vincent Chase finding a quick and easy way to get enough cash to pay for a wild weekend of fun.

If Manziel were a black 20 year-old, there is no question the little cinematic gem that plays in my mind would be radically different – not because of some insidious level of conscious racism in my soul, but because we judge what we see.  Same with the Ohio State player.  If they were white kids, the tattoo parlor wouldn’t be some poorly lit storefront in a bad neighborhood filled with boarded up buildings.  It would be well-lit in a decent area filled with tourists.  What we don’t see with our eyes, we concoct with our imagination.

The rule governing student-athletes being required to cede ownership of their images is a horrible overstep that has gone unchallenged for too long, and the race of the violators shouldn’t matter in the least.  But it does.

That’s a shame, but it’s the truth.

3 thoughts on “How Would America Respond to NCAA Violations If Johnny Manziel Was Black?”