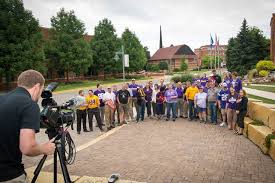 A scene of Kato Wide Party is shot – I’m guessing – in Mankato.

State legislatures pass bills to protect us from bad food, bad driving, and bad doctors.  We can’t tamper with the mail, trespass on one another’s lawns, make too much noise, pour paint down a storm drain, ride a bike faster than 15 mph on the Monon Trail, or carry a non-transparent bag into an NFL stadium.  But any moron can produce a video extolling the virtues of any damn thing.

The latest is a video love letter from the town of Mankato to the Minnesota Vikings to thank them for spending a few weeks each summer there for training camp.

Not only is “It’s a Kato-wide Party” a train wreck artistically like the two videos from Purdue we’ve been exposed to over the past couple of days, it’s especially repellent because it was produced by a radio station in Mankato.  The station filled the video with bits filmed at sponsor locations.  To profit from your artistic inabilities is especially repellent.

Unlike the Purdue videos, (you thought “You Ought to Be Proud” was the only video produced by these Boilermakers?  The first celebrated engineering, and it was equally brutal), the video with there is an African African sighting or three, although it’s the first is a strange interlude with a black lady sitting on a pile of Vikings sway.  Leslie Frazier and some players are also included later, without ruining their fred.

The most off-putting aspect of this mess, yes even more offensive than whoring clients into it is the percentage of people who are honestly trying to captivate with their performances.  Appearing cool in these thing is not an option.

For those who missed both the basketball and engineering videos from the little group that couldn’t in West Lafayette, those are below.

For the love of God, can’t these be stopped?

4 thoughts on “Another Day, Another Video Produced by Untalented But Earnest White People”