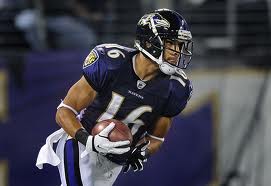 David Reed may help keep T.Y. Hilton in one piece.

That it was an incredibly slow news day explained why anyone even mentioned this deal in the media.  I heard about it minutes after it was completed, and thought I would pass on even mentioning it on Twitter because there was no way either guy was going to make their roster – and despite the trade, they still might not.

But maybe it is a bigger deal than first thought.

The one thing David Reed does well is return kicks.  The Ravens weren’t going to move Jacoby Jones out of that spot.  Delone Carter was stuck behind Vick Ballard, Ahmad Bradshaw, Donald Brown, and Kerwynn Williams, and that meant the Turk was going to show up at his locker sooner or later.

Sounding a lot like a deal designed to avoid being forced to cut people the respective GMs like, this trade was and is un-news.  But maybe – just maybe – it’s not.  Reed is a guy who was a spectacular kick returner before tearing his ACL.  If he can provide the same explosiveness Colts fans enjoyed in T.Y. Hilton, but keep the talented receiver from enduring the wear-and-tear of special teams play, maybe it makes sense.

Reed averaged 29.3 yards per return as a rookie in 2010 with a 103 yard touchdown.  The following year, the average rose to 29.7 before the ACL sidelined him.

If Reed can be an explosive return man while Hilton’s talents are saved for catching Andrew Luck’s passes, this is a deal that may be a little more worthwhile of mention than I originally thought.