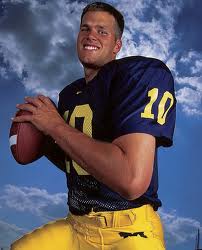 Looking at him is nauseating, but listening to him is revelatory.

Tom Brady is an easy guy to loathe.  He plays for Bill Belichick – the biggest jerk in the history of modern football – a repellant man who has zero grace or empathy, but makes up for what he lacks socially by winning an awful lot.

Brady has only played for Belichick, so they are forever linked.  Brady succeeds wildly on the field because of that association, and suffers greatly off the field as a man reviled because he has too much going for him.

He won three Super Bowls in his first four years, and married Giselle Bundchen.  Society says that’s plenty for one man, so we don’t like him.

In the media, he projects a haughtiness that is off-putting, and he went to Michigan, the home of arrogance without justification.  And Patriots fans might be worse.  The walk around like they couldn’t be happier – like they know they are right.

I could go on with a laundry lists of bad reasons not to like Brady, but there is no team in sports that is more enjoyable to watch fail.  It’s hard to decide when to root against Brady and the New England Patriots because when they make it to the Super Bowl, their failure on sports biggest stage is delicious.

Then I watched this video.  Once I got through the two minute introduction by head coach Brady Hoke, who simply does not know when the opener should cede the stage to the headliner, Brady made me like him.

His counsel to the current Michigan team was as solid a four minutes of advice I’ve heard delivered to a group.  Brady didn’t bring Giselle, wear his hair in some peculiar formation, or project the ego I have always associated with him.

Brady was humble, and spoke of the joy of teammates uniting in a common challenge.  When he was done, I felt like playing football for Michigan.

2 thoughts on “Tom Brady Speaks to Michigan Football Team; Hard Guy Not to Like, and I Hate Him for It”