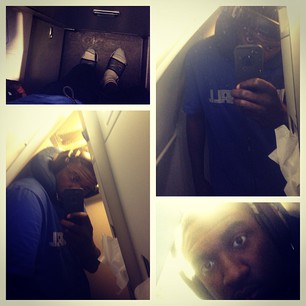 I’m not one to take selfies but I know y’all were wondering how I fit in an airplane bathroom and the answer is … I don’t. #crampedlife

I always wondered what it would be like for him if his digestive system called.  I’m a foot shorter and 75 pounds lighter than Greg, and it’s a tight squeeze in the lavatory.

We had a flight to Fayetteville, Arkansas, on a little plane where I couldn’t stand straight up.  Greg couldn’t sit straight up.  He never complained or whined for the 90 minute flight.

Pacers center Roy Hibbert is as big as Greg is, and posted some selfies on a plane yesterday to show how the confines of the facilities at 35,000 feet work for him.  They don’t.

Fortunately, height is the only similarity between Hibbert and Greg in the selfie department.

This picture also brought to mind a chapter in Wilt Chamberlain’s autobiography that described an interaction he had with a flight attendant in a passenger plane lavatory.  Hibbert’s pic that makes me doubt the veracity of Wilt’s claim.  Where there’s a Wilt, there’s a way, but this is physics.  You can’t put 204 ounces into a one gallon jug.