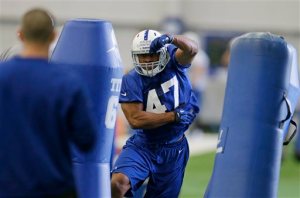 C.O. Prime still has a cool name, but not a job with the Colts.

There was no way that any of those players cut by NFL teams today were going to make the final cut to 53, but it still hurts to get the tap on the shoulder or the call to come to the team’s office.  Everyone cut today was – at the minimum – 22 players away from earning a spot on the final roster.

Stomachs churned, phone calls to family were made, and lives changed.

All athletic dreams die.  Statistically, you and I have a much better chance of winning the Powerball jackpot than leaving the sports we are best at under our own terms.  It’s likely that for as long as those 11 men can remember, they have dreamed of playing in the NFL, and August meant getting ready to play on autumn Friday nights and Saturday afternoons, but always with an eye toward playing for big cash on Sundays.

There is always a chance that some of these guys will catch on elsewhere.  Some may be back in someone’s camp next year, but for all intents and purposes it’s time to find something else to do with their lives.  Some are prepared for that, but many aren’t.

Men who have always believed in their talents, whose girlfriends and wives have their fingers crossed for the kind of good life an NFL paycheck can provide now have to wonder what the future holds.  They have gone from being members of a very exclusive club to being on the outside looking in.  The password for entry has been revoked, and the keys to the magical ride of an NFL season confiscated.  For some, this will be their first sniff of ordinary, and it will suck.

If there is a positive for these former players and their families, the acquisition of wealth doesn’t seem to be a mitigating factor in the misery that inevitably accompanies the end of a professional football career.  I’ve spent time with a lot of former players, and with only a couple of exceptions, the lack of the camaraderie that only exists on an NFL team is a significant hole in their lives.  Regardless of whether they are worth dozens or millions, there is a yearning for them that is universal.

Another bunch will join the players cut next Saturday when rosters are cut to 53 plus practice squad players, but this is the cruelest cut because being 22 guys away from a dream is a loud message that a regular season paycheck will never be forthcoming, and the dream house in a gated community will always be owned by someone else.

The last cut allows a glimmer of hope, because one of those guys was player #54.  This one doesn’t.

When you see the list of those cut, give some thought to them as the obituary of a family’s hopes and dreams.